"Saroj Khan, Will Always Be Grateful": Madhuri Dixit's Tribute To Her "Friend And Guru"

Saroj Khan, who choreographed Madhuri Dixit in several iconic Bollywood songs, also worked with her in Gulaab Gang and Kalank. 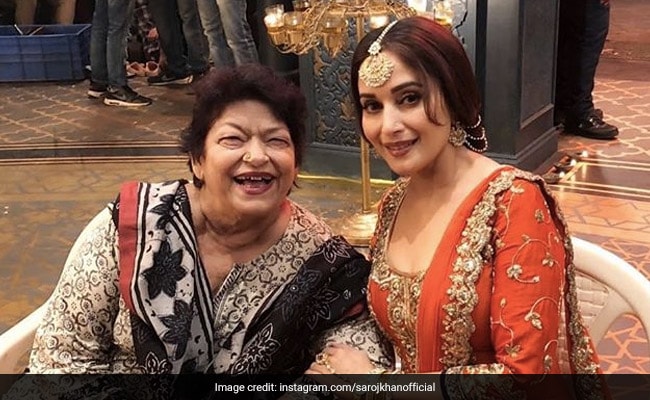 Saroj Khan died at the age of 71 (courtesy Instagram)

"I'm devastated by the loss of my friend and guru, Saroj Khan," tweeted actress Madhuri Dixit, who was the star of several iconic Bollywood songs choreographed by Saroj Khan. The veteran choreographer died of a cardiac arrest in Mumbai on July 3. She was 71. Madhuri Dixit, who also worked with Saroj Khan in the choreographer's last Bollywood project - 2019 film Kalank, credited Saroj Khan for her reputation as a legendary dancer: "Will always be grateful for her work in helping me reach my full potential in dance." An emotional Madhuri Dixit added in her tweet: "The world has lost an amazingly talented person. I will miss you. My sincere condolences to the family."

I'm devastated by the loss of my friend and guru, Saroj Khan. Will always be grateful for her work in helping me reach my full potential in dance. The world has lost an amazingly talented person. I will miss you My sincere condolences to the family. #RIPSarojji

"She taught me a lot, not just about dance but so much more," Madhuri wrote in an Instagram post, shared with priceless throwbacks.

I'm devastated & at an utter loss of words today! Saroj ji was part of my journey since the beginning. She taught me a lot, not just about dance but so much more. There's a rush of memories in my head thinking of this big personal loss. My heartfelt condolences to the family

Saroj Khan, who stepped into Bollywood as an independent choreographer in 1974, was recognised for her genius after choreographing Sridevi and later Madhuri Dixit for several dance numbers.

Ek Do Teen from Tezaab, Tamma Tamma Loge from Thanedaar and Dhak Dhak Karne Laga from Beta are some of Madhuri Dixit and Saroj Khan's best known collaborations. During her illustrious career, Saroj Khan won the National Award thrice, one of which was for the song Dola Re Dola, starring Madhuri Dixit and Aishwarya Rai Bachchan, from Devdas.

Had an amazing time shooting this beautiful song with such talented people. Truly missed the feeling of being on sets. 'Tabah Ho Gaye' out now. Link in my bio. // @dharmamovies @madhuridixitnene @karanjohar @remodsouza @varundvn @aliaabhatt @aslisona @adityaroykapur @duttsanjay

In the later part of her career, Saroj Khan worked with Madhuri Dixit in 2014's Gulaab Gang and 2019 movie Kalank.