"I never used to clean. I would go back, sleep, come the next day to shoot, in that filth," Parineeti revealed in a recent interview 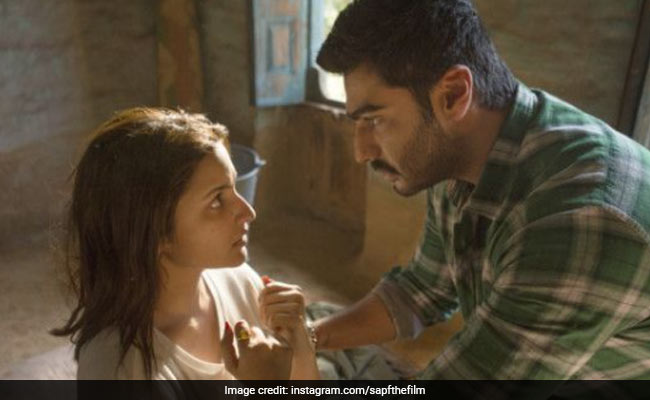 Did you know Parineeti Chopra slept in "filth, covered with mud" for almost three days for the hut sequence of her recently-released film Sandeep Aur Pinky Faraar? That's true. The actress, in a recent interview with PeepingMoon, revealed that she "didn't shower for two days for that sequence" and due to that, her "hair was white because of the dust." The scene Parineeti referred to in her interview is when her character Sandeep Walia suffered a miscarriage and was brought to a secluded hut by her partner-in-crime Satinder 'Pinky' Dahiya (Arjun Kapoor), who then took care of her and helped her to come to terms with her miscarriage. Talking about the aforementioned sequence, Parineeti Chopra said: "That whole sequence, we shot over two or three days in that hut. And as an actor - I really don't know how people are going to react to this information - but I didn't shower for two days, for that sequence."

"And that location was filthy. When I used to finish the day of shoot and go back home, I used to be covered with mud. My hair was white because of the dust. I never used to clean. I would go back, sleep, come the next day to shoot, in that filth," she added.

In Sandeep Aur Pinky Faraar, Parineeti Chopra plays the role of 'Sandy' Walia, a self-made woman on run after she tries to expose her boss for a scam involving millions of rupees. Arjun Kapoor plays a suspended cop, who seals a deal with Sandy to help her cross the Nepal border.

In his review for NDTV, film critic Saibal Chatterjee gave Sandeep Aur Pinky Faraar 3.5 stars and wrote: "Even after the film has run its course, one isn't certain whether the two lead characters were actually meant to be where they have ended up. It is only in conventional Hindi cinema that the hero (or the heroine, much less frequently of course) reaches a destination that is spelled out loud and clear in the very beginning. In Sandeep Aur Pinky Faraar, it isn't. That is the beauty of this film scripted by Banerjee and Varun Grover. It lets you roam free within the spaces it creates, does not put everything on the table and restrict your freedom to think for yourself."