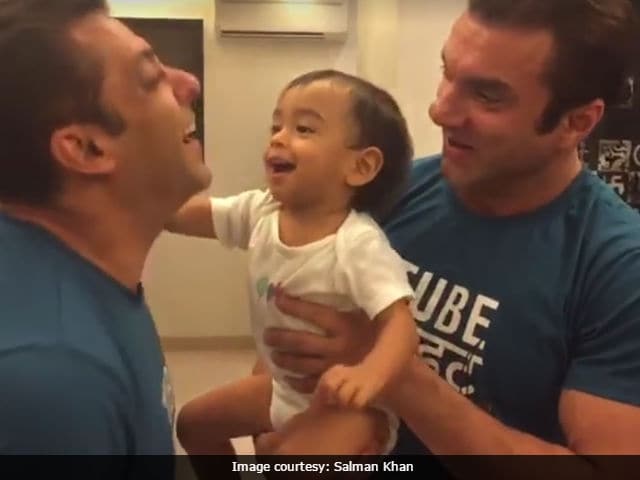 New Delhi: Salman Khan is undoubtedly his nephew Ahil's best play date companion. The 51-year-old actor, who launched the trailer of his upcoming film Tubelight on Thursday, shared a video of playing with his sister Arpita's son, who is only one-year-old. Sohail Khan, who co-stars in Tubelight, joined Ahil and Salman's mock boxing match. In the video Salman Khan posted on Facebook, Sohail has picked up Ahil, who punches Salman and looks pleased with himself after 'beating up' his action star mamu. Salman participated in the mock fight with enthusiasm making Ahil laugh and giggle. Sohail too encouraged Ahil to fight Salman. Watch their absolutely adorable boxing game.


Cuteness overload. After all, who else can dare to punch Salman except his nephew, who also gets to chew on his lucky bracelet?

Promoted
Listen to the latest songs, only on JioSaavn.com
Arpita married Aayush in November 2014 and their son, Ahil, was born in 2016.

Meanwhile, Salman Khan is gearing up for the release of Tubelight, which is directed by Kabir Khan. The film is the story of two brothers separated during an Indo-Sino war. After Tubelight will be seen in Ali Abbas Zafar's Tiger Zinda Hai with Katrina Kaif. Salman and Katrina were shooting for the sequel of their 2012 film Ek Tha Tiger in Abu Dhabi recently.