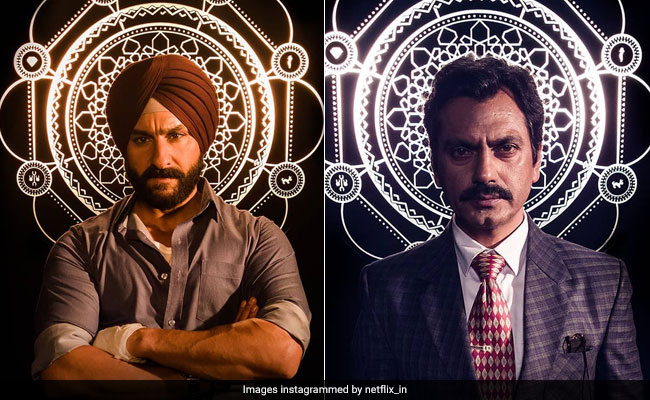 Sartaj Singh and Ganesh Gaitonde are all set to proceed with their unfinished business. The reason we brought this today is because Netflix India shared two brand new posters from the show Sacred Games 2on social media and we couldn't be more excited. The first poster features Saif Ali Khan, who plays the role of a police officer named Sartaj Singh in the show. Dressed in a grey shirt and a brown turban, Saif looks intense. The actor can be seen standing tall with folded arms. The poster was shared on the official Instagram account of Netflix India and the caption on the post read, "Agar Sartaj ko system badalna hai, toh khel toh khelna hi padega. This brought back memories of someone we love once telling Sartaj, 'I need a local cop like you."

We also got a glimpse of Ganesh Gaitonde in another poster of Sacred Games 2 shared by Netflix India. Fans will get to see Nawazuddin Siddiqui in a different look in the show in this season. The actor can be seen immaculately dressed in a grey suit and a red tie. The caption on the post read, "Pichli baar kya bola tha Ganesh bhai ko? Aukaat! A poem by Bunty: Ganesh Bhau looking fly in a suit. Ganesh bhau what is a tabut?"

The teaser of Sacred Games 2 released earlier this week and it introduced us to two new characters, which will be played by Kalki Koechlin and Ranvir Shorey. The teaser went insanely viral. Check out the teaser here:

Season 2 is coming. Put your chattris in the air. #SacredGamesS2

Sacred Games is based on Vikram Chandra's novel of the same name. Pankaj Tripathi has reprised his role as Guruji in the second season of the show. The show will be directed by Anurag Kashyap and Neeraj Ghaywan.