"This season of Mixtape is romance and it was perfect to have this talented couple Sachet and Parampara Tandon as a part of it," said Bhushan Kumar Sachet and Parampara in a still from the show.

Abhijit Vaghani gives a modern twist to two iconic romantic numbers Tu Meri Zindagi - Adayein, for the second episode of this season. Listen to this T-Series Mixtape Rewind episode first on Amazon Prime Music. The duo who has mesmerised the audience with their music, their voices and are currently a sensation with their reels, Sachet and Parampara Tandon are all set to surprise fans on the 3rd season of Bhushan Kumar's T-Series' Mixtape Rewind, presented by Amazon Prime Music. Originally written by Sameer, Tu Meri Zindagi and Adayein that are considered cult romance numbers of the 90s, now turn into mesmerizing renditions in the soulful vocals of Sachet-Parampara and fused by Abhijit Vaghani.

Making monsoons fuzzier and more romantic, this season of Mixtape is all about reminiscing the gems of 90's and early 2000's. Everyone's current favourite composer-singer duo, Sachet-Parampara together have given various power-packed performances in the past, however, the magical duo will be seen sharing the stage for the first time on Mixtape. Not only the rendition will strike a chord with the audiences, one will easily get lost in the magical world that director Ahmed Khan has created while filming this.

The new season will be available exclusively first on Amazon Prime Music for Prime members to enjoy an ad-free and hands-free voice enabled experience with Alexa. 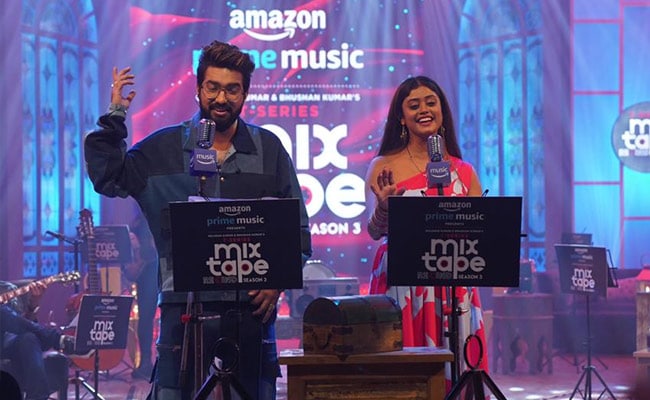 A still from the show.

Bhushan Kumar says, "This season of Mixtape is romance and it was perfect to have this talented couple Sachet and Parampara Tandon as a part of it. While Abhijit has retained the essence while adding fresh tunes, this episode is filled with melody, mystique and magic!"

Speaking about blending Tu Meri Zindagi and Adayein, music composer Abhijit Vaghani says, "Tu Meri Zindagi Hai is one of my favourite tracks and I wanted to blend Adayein with that because of the scaling and paring of the key and the tempo which worked well together. These love songs were apt for Sachet and Parampara to sing because they have some amazing voices as well as some techniques that can blend both the tracks together when they sing. Sachet and Parampara have very versatile voices that can be adapted to different formats and they have truly brought new energy and life to these love songs."

Says Sachet Tandon, "Parampara is one of the best female singers we have right now in the industry. It was so much fun sharing the stage with your musical and your life partner. I feel very lucky that we got these two tracks to sing. I've been a big fan of the Aashiqui album so I really enjoyed doing it on mixtape. I also really want to thank Bhushan Sir for making us both a part of this beautiful #MixTape Franchise."

Adds Parampara Tandon, "I always feel proud to be singing along with Sachet. He's been there with me as my biggest critic. He is the master of his art. His passion and his honest approach towards music help both of us stay true to our performance. Both songs are iconic. 90s music completely changed the game of the music industry. I feel so amazing that we're part of this year's mixtape. Hoping that our fans will like our attempt of singing these mashups in our way."