"Thank you for all the love, blessings and good wishes," Evelyn Sharma wrote after congratulatory messages flooded her Instagram post. 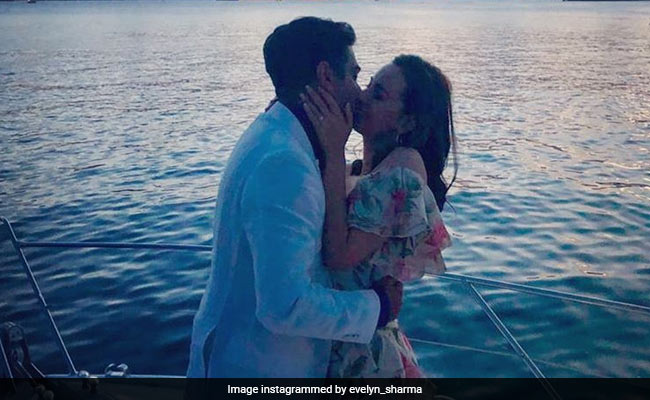 Actress Evelyn Sharma, best-known for her roles in Yeh Jawaani Hai Deewani and Saaho, announced her engaged with Tushaan Bhindi, a dental surgeon practising in Australia, on social media. Evelyn shared a picture of herself and Tushaan (in a romantic moment) on a yacht with the Sydney's famous Harbour Bridge in the backdrop. She captioned the post, "Yessss" which she shared with a ring emoticon. After several congratulatory messages, Evelyn wrote in the comments thread, "Thank you for all the love, blessings and good wishes. This really means the world to me! Love you guys!"

In an exclusive interview to the Times Of India, Evelyn shared the story of Tushaan Bhindi proposal and how they met last year. Speaking about the proposal, Evelyn described the moment as 'dream come true' and said, "It was a dream come true! Tushaan knows me so well... his proposal was perfect." She also told TOI that they've not set a date for the wedding for now. "We will make a separate announcement for that once the date is set. For now, we would like to enjoy our time together."

When asked about how they met, Evelyn revealed: "We met on a blind date last year, which was set up by our good friend. Tushaan is a romantic guy and he's even more filmy than I am."

Evelyn Sharma made her Bollywood debut with 2012 film From Sydney With Love and she went on to feature in movies like Nautanki Saala, Issaq, Main Tera Hero and Yaariyan.

She was last seen in Saaho featuring Prabhas and Shraddha Kapoor in the lead roles.