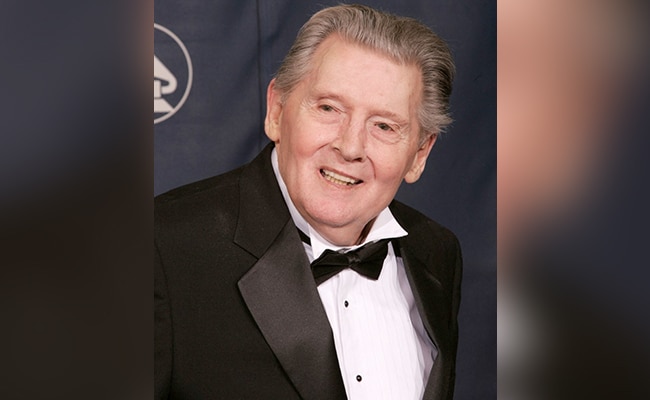 Jerry Lee Lewis, a scandal-generating kingpin of 1950s American rock and roll who played a pivotal role in shaping the genre's sound, died on Friday. He was 87 years old. Famous for his flowing blond locks, rowdy piano beats and outrageous stage presence, the star best known for his classic Great Balls of Fire died of natural causes, his publicist told AFP.

"He is ready to leave," an accompanying statement quoted the artist's wife Judith as saying.

The statement said Lewis suffered years of illnesses and injuries: "He had abused his body so thoroughly as a young man he was given little chance of lasting through middle age, let alone old age," it read.

A friend and rival of Elvis Presley, Lewis's career spanned more than half a century and produced a wealth of eyebrow-raising stories about his numerous wives -- including a teenage cousin - drunken rampages and run-ins with the government over back taxes.

It also produced a string of indelible hits.

Born on September 29, 1935, in Ferriday, Louisiana, Lewis took to the keys at age nine. The following year, his parents Elmo and Mamie mortgaged the family farm to buy him an upright piano.

Along with his cousins Mickey Gilley and Jimmy Swaggart - who would respectively go on to become an award-winning country musician and a scandal-tainted evangelist -- Lewis spent hours perfecting his craft.

In 1956, Lewis struck out for Memphis, Tennessee - the southern American city famous as a cradle of soul, blues and rock - to link up with the producer Sam Phillips at Sun Records, who was instrumental in Presley's astronomical rise.

Lewis, Presley and Johnny Cash got together with Carl Perkins at the studio for the "Million Dollar Quartet" jam session that year, which was released much later to acclaim.

Lewis soared to fame the next year with his breakout hit "Whole Lotta Shakin' Goin' On" - whose provocative lyrics shocked some radio stations that at first refused to play it.

"It was just another song to me," he told The New York Times in 2006. "The girls went a little berserk, but that's girls for you."

His follow up, Great Balls of Fire, remains one of the best-selling singles of all time, and was also the name of a 1989 docudrama about Lewis starring actor Dennis Quaid.

By the summer of 1958, Lewis - nicknamed "The Killer" -- was rocketing to the top, with fans packing shows, money flowing in, and a third hit, Breathless, climbing the charts.

In an era when even the slightest lower body gyration by Presley caused a sensation, Lewis carried it further, thumping on the keys with hands and feet, and leaping atop his grand piano to squeals of delight.

"Who would have thought it would be me?" the publicist's statement quoted the rocker as saying in his final days.

Lore has that Lewis even lit his piano on fire in an attempt to outshine guitarist Chuck Berry, who had snagged the closing slot that same night.

Elton John tweeted that without Lewis "I wouldn't have become who I am today," calling him a "trailblazing inspiration."

"He was groundbreaking and exciting, and he pulverized the piano."

It all came crashing down, however, in 1958 when Lewis embarked on a tour of Britain -- and the press there discovered he had married his 13-year-old second cousin Myra Gale Brown.

His stateside return also proved a rude awakening, as Lewis found himself blacklisted from radio and television.

He headed out on the road for one-night shows in bars and minor clubs.

For most of the 1960s, Lewis was on the margins, eclipsed by the next generation like The Beatles, as his illicit marriage would forever tarnish his legacy.

But he remained an inspiration to his celebrity successors.

When they met in the early 1970s, John Lennon knelt down to kiss Lewis' feet, telling him: "You are the man who made it possible for me to be a star in rock-n-roll music."

"I just kind of froze," Lewis told GQ of the moment.

Lewis jumped over to country music, searching for a fresh start. He also re-recorded some of his classic tunes.

In 1986, he was part of the first class inducted into the Rock and Roll Hall of Fame, alongside fellow greats including Presley, Berry, James Brown and Ray Charles.

He received a Grammy Award for lifetime achievement in 2005.

Late in life, he collaborated with Mick Jagger and Eric Clapton on his studio albums.

"Your songs lit up my life!" tweeted Jagger.

Lee's personal life continued to prove concerning and stormy. After 14 years of marriage to Myra, who accused the singer of physical and mental abuse, the couple divorced.

Married twice before Myra, Lewis wedded four times after. He had six children. One died in a swimming pool accident as a toddler, and another died in a car accident.

In 1993, arguments with the US government over back taxes led officials to seize pianos, furniture and other personal items to cover his debt.

A notorious hard drinker, Lewis at times was addicted to prescription pills.

He toured extensively late in life, though a stroke in 2019 curtailed his schedule.

"When they look back on me, I want them to remember me not for all my wives, although I've had a few, and certainly not for any mansions or high living money," Lewis said.

"I want them to remember me simply for my music."