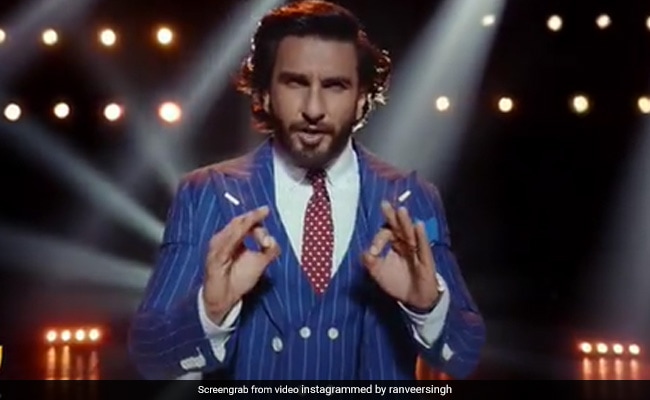 For fans who have missed seeing the talented Ranveer Singh on the big screen, this news is bound to make you happy. The actor, who was last seen in the movie Gully Boy in 2019 directed by Zoya Akhtar, is set to appear on television screens across the country as the host of a quiz show. Ranveer shared the news of his television debut by posting a teaser promo of the quiz show called The Big Picture on Instagram. The show will air on Colors and will also be available on OTT platforms, Voot and Jio TV.

The video begins with Ranveer taking us through some of his most loved and appreciated roles — right from his character Bittoo Sharma from his debut Band Baaja Baaraat to the dark and alluring Alauddin Khilji in Padmaavat. In the promo he says, “Dekha jaye toh khel bas nazar ka hai (if you see, the game is only of one's perception)” hinting at the format of the quiz show. He further explains that each contestant will have to answer questions in the form of pictures, and, on answering correctly, they will be rewarded in crores.

The video posted by the actor was received with a lot of excitement by his fans and followers. Many of them dropped hearts and fire emojis to express their joy at the news.

Ranveer will be seen next in Kabir Khan's sports drama 83, which will showcase India's iconic win at the 1983 cricket world cup. In the film, Ranveer stars as legendary cricketer Kapil Dev, while Deepika Padukone features as Kapil Dev's onscreen wife Romi Bhatia. Ranveer will also be seen in an upcoming movie titled Jayeshbhai Jordaar produced by Yash Raj Films.

The actor has also made a cameo appearance in Rohit Shetty's cop drama series Sooryavanshi starring Akshay Kumar and Katrina Kaif in the lead roles. He has also signed another project with Rohit Shetty, which is titled Cirkus.