"Your journey has been nothing short of inspirational," wrote Rajesh Khattar 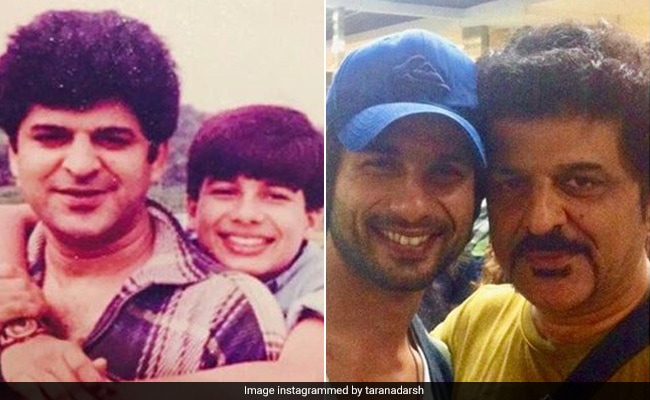 On Shahid Kapoor's 38th birthday, Rajesh Khattar shared an adorable birthday post on his Instagram profile. The 52-year-old actor, who was earlier married to Shahid's mother Neelima Azim, shared a picture collage on Instagram. On the left, was a picture from the days when Shahid was a teenager and it was juxtaposed with a recent photograph, where the duo could be seen happily posing together. Mr Khattar accompanied the collage along with an extensive birthday note for the Haider actor and wrote: "From being a good looking teenager to the most good looking young man. From being the most promising newcomer to an award winning megastar. From being a loving husband to a doting father, your journey has been nothing short of inspirational." The Sooryavansham actor added, "You have evolved to be a complete performer and an exceptional human being, making all around you super proud. Happy birthday Sasha (Shahid's nickname). Have a blessed one and keep shining."

From being a good looking teenager to the most good looking young man. From being the most promising newcomer to an award winning mega star, from being a loving husband to a doting father,ur journey has been nothing short of inspirational. U have evolved to be a complete performer & an exceptional human being & make all around you super proud #happybirthday sasha @shahidkapoor #shahidkapoor Have a blessed one & #keepshining

Rajesh Khattar married Shahid Kapoor's mother Neelima Azim in 1990. However, they got divorced in the year 2001. They are parents to Ishaan Khatter, who was last seen in Shashank Khaitan's Dhadak, co-starring Janhvi Kapoor.

Shahid Kapoor was last seen in the 2018 film Batti Gul Meter Chalu, co-starring Shraddha Kapoor and Yami Gautam. Shahid is currently busy with the shooting of Kabir Singh, co-starring Kiara Advani, which is the remake of the 2017 Telugu film Arjun Reddy. The actor has also signed another film based on the life of boxer Dingko Singh.

Shahid Kapoor made his Bollywood debut with the 2003 film Ishq Vishk. He has delivered several hit films such as Jab We Met, Kaminey, Haider, Udta Punjab and "Padmaavat" among others.