For Priyanka Chopra, the never-ending veil/train trend dates back to Met Gala 2017 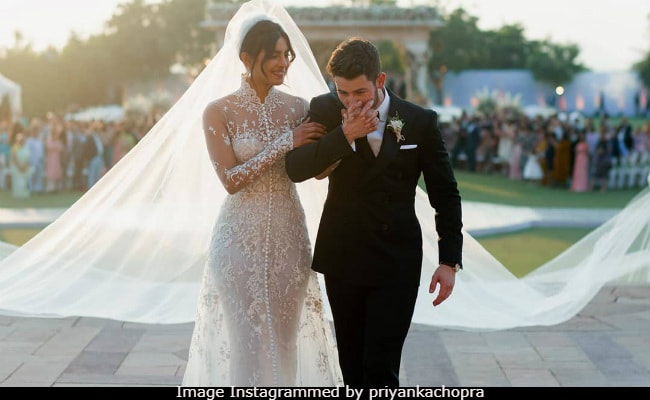 Priyanka Chopra and Nick Jonas' Christian wedding ceremony looked just like a dream! The sight of Priyanka Chopra walking down the aisle may have made Nick Jonas teary-eyed at the altar but Twitter is thrilled about the bride's 75-foot long veil. For the Christian ceremony, both the bride and the groom opted for custom Ralph Lauren creations and Priyanka added an ethereal tulle veil to go with her all-white look. Just that the veil was 75-foot long, which is reportedly some 60-foot longer than what her friend Meghan Markle (Duchess of Sussex) wore at her wedding. "Priyanka's veil was out of this world," read a comment on Twitter while another added: "Refusing to get married unless I have an exact replica of Priyanka's 75-foot veil. That is all I ask!"

Well, well, well... here's a memory refresher for you all. For Priyanka Chopra, the never-ending veil/train trend dates back to Met Gala 2017. Nick and Priyanka made a stunning appearance together in Ralph Lauren outfits at last year's Met Gala. Priyanka wore a trench coat dress with a 20-foot train. Yup, that's how she rolls. 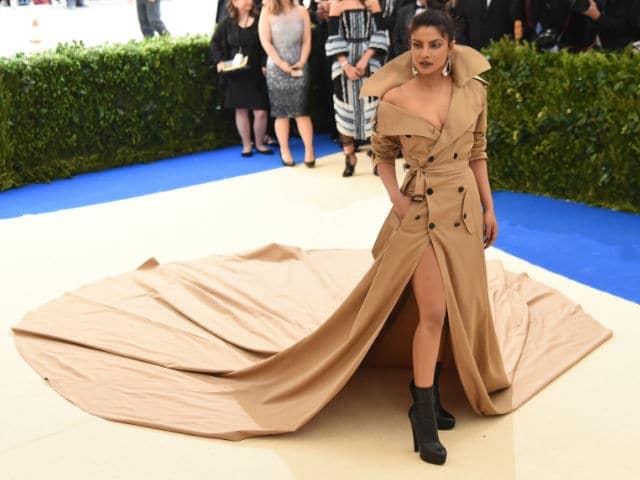 Moving on, many on Twitter have also agreed that yeah, the veil may have been a little extra but still couldn't get over how mesmerising it looked. "Priyanka's veil is so extra and I love it," wrote a fan while another added: "Umm. Can we talk about Priyanka's veil? Like? How." Meanwhile, another user tweeted to say: "Priyanka Chopra's wedding is the actual royal wedding. Her veil is everything! That veil is longer than Satan's plans to ruin mankind." Priyanka and Nick had two wedding ceremonies in Jodhpur and the Christian wedding was on December 1.

Priyanka's veil was out of this world pic.twitter.com/IDBCBx3zL6

Priyanka's veil is so extra and I love it pic.twitter.com/gWdgMkw5Ez

UMMM can we talk about Priyanka's veil??? Like??? How pic.twitter.com/Qe1NpSOTLQ

Priyanka Chopra's wedding is the the actual royal wedding
Her veil is EVERYTHING!!!!!!!!!!!!!!!!!!!!
That veil is longer than satan's plans to ruin mankin pic.twitter.com/1gbK3XxDB3

priyanka chopra's veil is how extra i wanna be when i get married. oh my GOD pic.twitter.com/4ygsFLFX7o

if i don't have a wedding veil as long as Priyanka's... that's it, I'm not getting married

Whatever you're looking at right now, if it's not Priyanka Chopra's veil it's wrong pic.twitter.com/3uok7F3cEV

However, Priyanka's wedding veil also inspired several memes on Twitter. If you remember how Twitter reacted to Priyanka's Met Gala outfit in 2017, then you wouldn't be surprised to see these memes.

priyanka's 75ft veil is longer than my lifespan

Disappointed that Nick Jonas didn't arrive at the wedding by jumping out of a plane without a parachute and landing in Priyanka's veil. pic.twitter.com/pxJtsGnJBc

ummmm why is priyanka chopra's wedding veil bigger than my apartment????? how much is rent?? pic.twitter.com/74fulCSUET

Priyanka's veil was longer than most relationships

Priyanka's wedding dress was "love at first sight" for the 36-year-old actress, as reported by Wedding Sutra. She wore a collared floor-length sheath gown with a strapless column dress underneath. The hand-embroidered sheath was embellished with sequins and the embroidery required 1,826 hours to be completed, as per Wedding Sutra, who also added that the column dress was "made up of 2,380,000 mother of pearls sequins." Wow.

Ralph Lauren, who was also one of the first ones to congratulate the couple, shared the details of Nick's wedding outfit and wrote: "The groom wore a Purple Label double-breasted tuxedo with a piece of the bride's dress hand-embroidered with the Urdu words 'My Jaan' (meaning 'My Life') at the interior lapel of the jacket, just over his heart."

Priyanka Chopra and Nick Jonas hosted their first wedding reception in Delhi on Tuesday, which was also attended by Prime Minister Narendra Modi.