"Clearly not feeling it," wrote Pooja 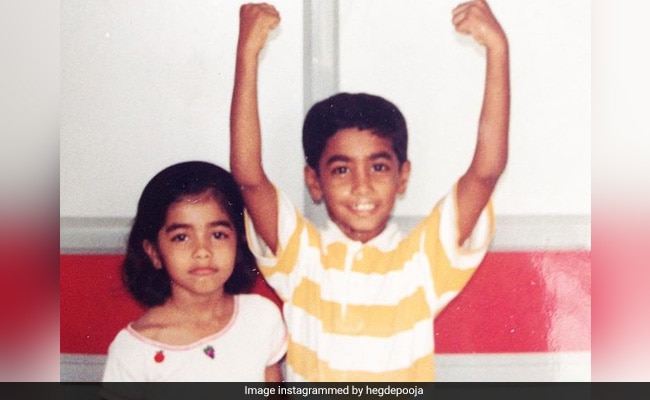 Pooja Hegde's latest post on Instagram is younger siblings everywhere. The actress, on Wednesday, picked a memory from her childhood and shared an ROFL throwback picture from the time when her brother Rishabh used to try different wrestling moves on her, including the famous move chokeslam. In the photograph, Pooja's brother can be seen posing like a wrestler and grinning as he stands next to her. The actress' expression in the blast from the past is winning the Internet. Sharing the picture, Pooja wrote: "The Yin to my Yang... Rishabh Hegde" and added the hashtags ClearlyNotFeelinIt #ChokeslamVictim #HegdeDuo and #Anna. Check out Pooja Hegde's post here:

Pooja Hegde is not a big fan of throwback pictures. The reason we are saying this is because she rarely posts pictures of herself from her childhood or teenage days. On Children's Day last year, she posted a really adorable photo of herself from the time when she was a little munchkin. In the photograph, Pooja, dressed in a red and black outfit, can be seen laughing with all her heart. "Happy Children's Day! Like...seriously...I hope you're this happy," she wrote in the caption and added the hashtags #happysoul and #toothlesswonder.

Pooja Hegde made her acting debut with a 2012 Tamil film Mugamoodi. She later joined Bollywood with Ashutosh Gowariker's Mohenjo Daro, in which she co-starred with Hrithik Roshan. She has also worked in films such as Duvvada Jagannadham, Housefull 4, Saakshyam, Maharshi and Ala Vaikunthapurramuloo, in which she starred alongside Allu Arjun.