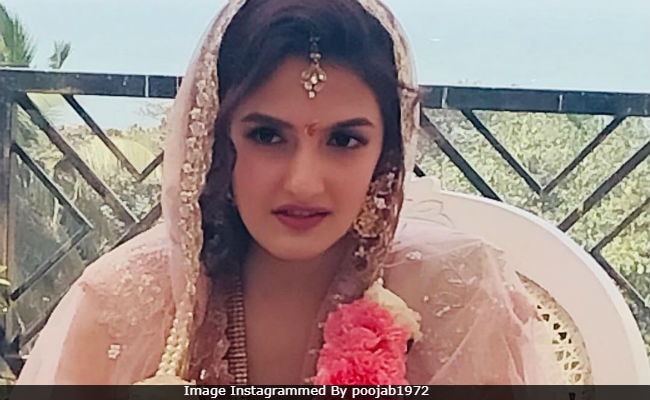 Actress-filmmaker Pooja Bhatt is busy attending her cousin Sakshi's wedding and from the venue, she shared a set of pictures, featuring the bride and the groom. Sakshi is filmmaker Mukesh Bhatt and wife Nilima's daughter. Her brother is film director Vishesh Bhatt. "The baby of the Bhatt family - Sakshi - ties the knot with Mazahir and ensures that the Bhatt family inherits the absolute gems that constitute the Mandasaurwala family! Our grandmother Shireen Nanabhai Bhatt must be smiling so wide in heaven right now," read Pooja Bhatt's caption for the pictures from Sakshi's wedding. The bride looked beautiful in a pink lehenga while the groom opted for a golden sherwani.

The baby of the Bhatt family @sakshibhatt ties the knot with Mazahir and ensures the Bhatt family inherits the absolute gems that constitute the Mandasaurwala family! Our grandmother Shireen Nanabhai Bhatt must be smiling so wide in Heaven right now! #familytime #weddingbells #loveisstillalive

For the wedding, Pooja Bhatt wore an off-white beautiful outfit. Here are some picture she shared of herself.

Look! I can on occasion also do (off) white ; )#familytime #weddingbells

Mukesh Bhatt is filmmaker Mahesh Bhatt's brother. Together, they own the production house Vishesh Films, named after Vishesh Bhatt. Murder was directed by Vishesh while he produced Jannat.

Pooja Bhatt and her brother Rahul are Mahesh Bhatt's children with his first wife Kiran (real name Lorraine Bright). They married in 1968. Their marriage reportedly ended after Mahesh Bhatt's alleged affair with actress Parveen Babi. Years later, he married actress Soni Razdan, with whom he has two daughters Shaheen and Alia Bhatt, who is a successful actress.