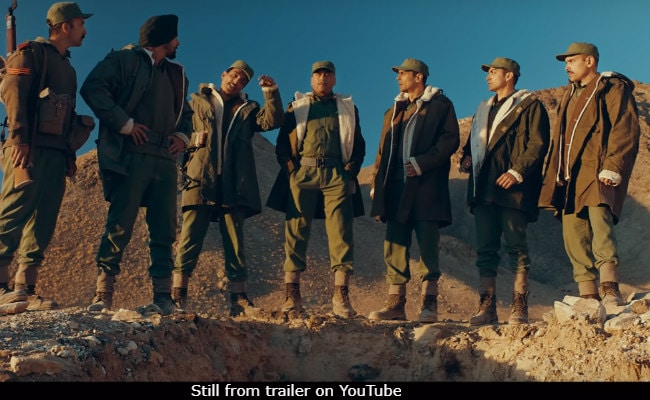 The trailer of J P Dutta's upcoming war drama Paltan was released on Thursday and to be absolutely honest, it fails to keep us engrossed till the end. The trailer begins with a reference to the 1962 Indo-China war (which came to an end after China declared unilateral ceasefire but the Indian army suffered massive casualties) with dramatic war footage and animated narration. Soon, the scene shifts to 1967 and OTT dialogue deliveries attempt to drive home the point that India and China are on the brink of a military clash - a moment of revelation arrives in the trailer to say that Paltan is based on the Nathu La and Cho La military clashes, which took place along the Indo-Chinese border in October of 1967.

The trailer of Paltan offers glimpses of the cast, comprising Arjun Rampal, Jackie Shroff, Gurmeet Choudhary, Siddhanth Kapoor (Shraddha Kapoor's brother), Harshvardhan Rane and Luv Sinha (Sonakshi Sinha's brother), who will be making his Bollywood debut with the film. Actresses Sonal Chauhan and Deepika Kakkar, who play the wives of the soldiers in the movie, also make brief appearances in the trailer. Towards the end of the 3-minute video, dialogues are drowned by unnecessarily loud background score and the synchronised sound of gunfire and occasional bombardments.

Watch the trailer of Paltan here:

The cast of Paltan was introduced on social media earlier this week, when trade analyst Taran Adarsh put out these tweets:

With Paltan, J P Dutta is returning on the director's chair after a gap of 12 years - 2006's Umrao Jaan was his last directed film. J P Dutta is best known for helming war movies like Refugee, Border and LOC Kargil. Paltan is all set to hit screens on September 7.