Will Smith slapped comedian Chris Rock at the Oscars 2022 event for making a joke about his wife Jada Pinkett Smith's hair. 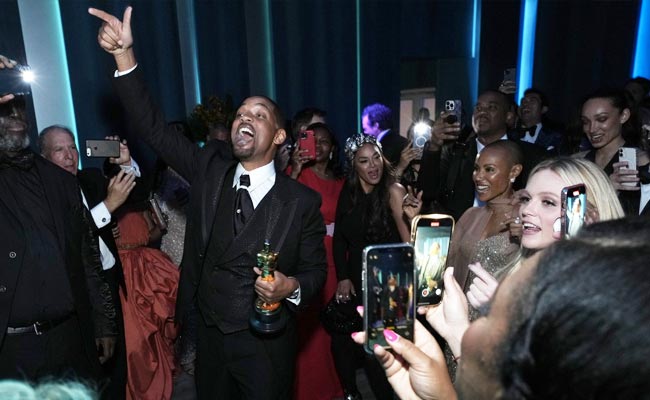 Actor Will Smith was seen partying hard at a post-Oscars bash after causing the biggest scandal in the Academy Award's 94-year history and later winning the Best Actor award. The afterparty was organised by Vanity Fair magazine, which many celebrities attended.

Will Smith posed for selfies and danced as the DJ played his songs “Gettin' Jiggy Wit It” and “Miami”, videos on Twitter showed.

Will smith after party 😂#AcademyAwards#WillAndChris#arrestwillsmithpic.twitter.com/WfA420XtHY

The 55-year-old actor was joined by his wife Jada Pinkett Smith and their children at the bash at the Wallis Annenberg Center for the Performing Arts in Beverly Hills in the early hours of Monday. The party was held hours after Smith walked up to host and comedian Chris Rock during the Oscars presentation and punched him for making a joke about his wife's hair.

After the outburst, Smith returned to his seat and was heard screaming, "Keep my wife's name out of your f****** mouth."

Jada Pinkett Smith has shaved her head due to alopecia areata, a condition which leads to hair loss. She opened up about her condition a few years ago at her talk show Red Table Talk, which started airing on Facebook Watch in 2018.

Social media was flooded with comments after the incident, with many calling Will Smith's action justified and others calling for him to lose his Oscar. His family has stood by him.

Rock has, meanwhile, refused to file a police complaint, according to Los Angeles police Department (LAPD).