"Hope I'm Invited Back": Will Smith's Apology After Oscar Slap 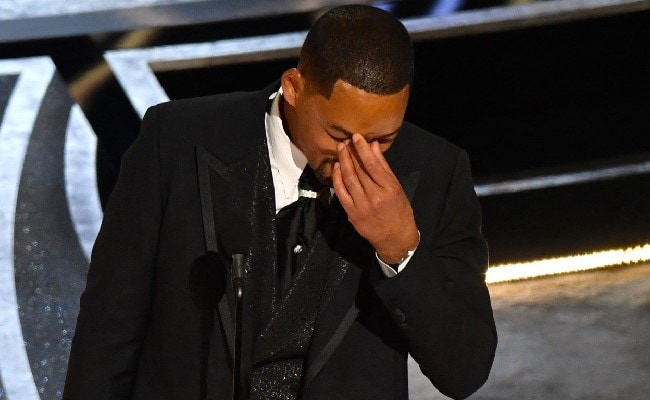 The 94th Academy Awards were all but hijacked by Will Smith who, shortly before he won the Oscar for Best Actor, punched and swore at presenter Chris Rock who made a joke about Will's wife Jada Pinkett. In his emotional speech soon after, a tearful Will Smith apologised – although not directly to Chris Rock. ““I want to apologize to the Academy. I want to apologize to all my fellow nominees. This is a beautiful moment and I'm not crying for winning an award. It's not about winning an award for me. It's about being able to shine a light on all of the people,” he said, “Art imitates life. I look like the crazy father, just like they said about Richard Williams. Love will make you do crazy things.”

Will Smith also revealed what fellow Best Actor nominee Denzel Washington told him in the commercial break after the altercation with Chris Rock. ““Thank you, Dee. Denzel said a few minutes ago, ‘At your highest moment, be careful, that's when the devil comes for you,'” Will Smith said.

Chris Rock enraged Will Smith by making a GI Jane joke about Jada Pinkett, in apparent reference to her shaved head – Jada suffers from alopecia As she eye-rolled, Will went up on stage, slapped Chris, returned to his seat and yelled out, “Keep my wife's name out of your f*****g mouth.” Chris Rock told the audience, “Will Smith just smacked the shit out of me. It was a G.I. Jane joke. That was the greatest night in the history of television.”

Damn. So did Will Smith just punch Chris Rock for real? Here is a Japanese network's uncensored exchange between Will Smith and Chris Rock. #Oscars#WillSmithpic.twitter.com/fjqgypVdue

Social media was confused about whether or not the altercation was a planned skit. It soon became clear that it wasn't and reactions flooded Twitter. One tweet read, "One thing about me... Imma keep Will Smith's wife's name out my mouth. #whatjusthappened #WillSmith #Oscars"

One thing about me... Imma keep Will Smith's wife's name out my mouth. ????#whatjusthappened#WillSmith#Oscarspic.twitter.com/NbIqFa3l2u

"Yes, that's me. You're probably wondering how I ended up in this situation". #WillSmith | #ChrisRock | #Oscars," read another.

"Yes, that's me. You're probably wondering how I ended up in this situation". #WillSmith | #ChrisRock | #Oscarspic.twitter.com/0NNB8aYbRo

"The Slap that ended it all #Oscars #Oscar #WillSmith," read another tweet.

The Slap that ended it all #Oscars#Oscar#WillSmithpic.twitter.com/Qghbf1rmSh

Will Smith won his first Oscar after two previous nominations for Ali and The Pursuit Of Happyness. The big winners of this year's Oscars were CODA, which won Best Picture, and Dune, which won six awards.