Oscars 2018: As Jimmy Kimmel Returns As Host, A Piece Of Advice From Ellen DeGeneres

Oscars 2018: "Jimmy Kimmel, tonight's your night! If you get nervous, just picture them all naked," wrote Ellen DeGeneres 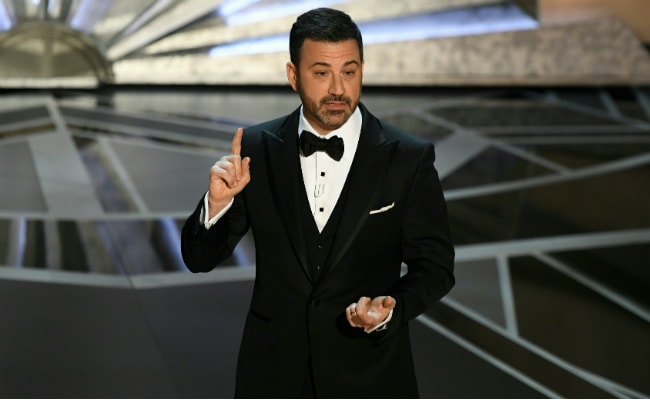 New Delhi: It's Hollywood's big night today, and a very big night indeed for TV personality Jimmy Kimmel, who returned to host the Oscars for the second time in a row - the first host since Billy Crystal to do so. Well, was Jimmy Kimmel a tad bit extra nervous for the big show, especially after last year's infamous Best Picture flub (more about that later) when La La Land was initially and accidentally announced as the top winner of the night before it was corrected to be Moonlight? It didn't seem quite so but even if he was, he seems to have taken Ellen DeGeneres' suggestion (a hilarious one) for busting stress.

In a tweet just hours before the Oscars were to begin in Los Angeles, Ellen wrote: "Jimmy Kimmel, tonight's your night! If you get nervous, just picture them all naked. I don't know if that helps, but it sure is fun. #Oscars."

Umm, well, that's one heck of a suggestion but I'm sure Ellen would know better. She hosted the Oscars in 2014 and who can forget the night that was!

.@JimmyKimmel, tonight's your night! If you get nervous, just picture them all naked. I don't know if that helps, but it sure is fun. #Oscars

Not just as the show host, Ellen's another stupendous contribution to the 2014 Oscar memories was the massively viral selfie, featuring the likes of Brad Pitt, Bradley Cooper, Jennifer Lawrence, Meryl Streep, Julia Roberts and many more - it became the second most retweeted tweet ever.

Jimmy Kimmel did not disappoint those who were waiting for many references to the Weinsteingate and Hollywood sexism in his opening monologue. "We can't let bad behavior slide anymore. The world is watching us. We need to set an example," said the show host, before infusing some humour into his speech at the cost of the Oscar statuette. "Just look at him. Keeps his hands where you can see them. Never says a rude word," he quipped. Other Oscar highlights featuring the show host would include Jimmy Kimmel's hilarious interaction with "his nine-year self" and a hotdog selling session with Gal Gadot.

Earlier this year, Jimmy Kimmel had announced his return on the Oscar stage for the 90th Academy Awards with a short video also featuring Warren Beaty (who, along with Faye Dunaway mistakenly called out La La Land as the Best Picture winner), something which he re-shared on Oscar day.

Promoted
Listen to the latest songs, only on JioSaavn.com
Meanwhile, here's Mr Kimmel's idea of a 'Happy Oscar Sunday', featuring his daughter Jane.

The 90th Academy Awards are currently underway at the Dolby Theatre in Los Angeles.