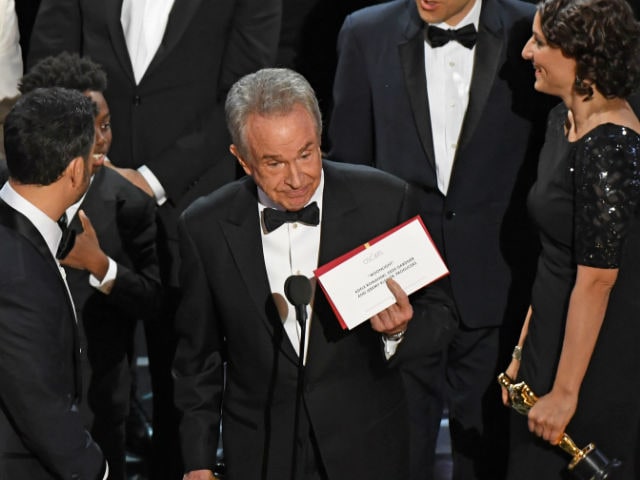 New Delhi: We knew, or should have known, there was something up at the 89th Academy Awards when Warren Beatty, presenting the final Oscar for Best Film, opened the envelope he'd been given and gazed at his co-presenter, his Bonny And Clyde co-star Faye Dunaway, in bemused incomprehension. She took it from him and read the name of the film out - La La Land. It was La La Land's seventh Oscar, except that it wasn't. Moonlight had actually won and the mistake was not corrected until the producers of La La Land had begun their vote of thanks. Moonlight, director Barry Jenkins' drama of a young black man discovering and dealing with his homosexuality, is this year's Best Film. Not La La Land, the much-awarded musical starring Ryan Gosling and Emma Stone, who won Best Actress. It was the most dramatic of endings to what is Hollywood's biggest award show, the highest validation that actors aspire to.

Pandemonium broke out in Los Angeles' Dolby Theatre, the Oscar venue, and on social media which instantly drew parallels with Steve Harvey's announcement of the wrong Miss Universe winner last year. "What did you do?" host Jimmy Kimmel asked Mr Beatty, 79, who apologized. He didn't really need to though. Despite the jokes on Twitter, it appears that neither Warren Beatty nor Faye Dunaway are to blame - they were given the wrong envelope.

Be that as it may, the mocking is brutal. Even Karan Johar, Rishi Kapoor and Shabana Azmi got quips in:

Warren will want to BEAT someone! And Faye just faded away! #Oscars

OSCARS. Shit happens at Oscars too!

What?!! I just cant believe what happened at the Oscars !!!

The Steve Harvey comparison was too delicious for Twitter to ignore - even the Miss Universe handle tweeted:

Have your people call our people - we know what to do. #Oscars#MissUniverse

The mocking was merciless:

Rumor: Leo DiCaprio never gave Emma her envelope when she won and it somehow got into Warren Beatty's hands. Didn't he see it was unsealed?

There was some sympathy for Warren Beatty, particularly from former Oscars host Neil Patrick Harris:

I feel bad for all involved: Warren, Jimmy, Marc Platt and the incredible La La Land team. That said, congrats to Moonlight. It's brilliant.

The person who gave Warren Beatty the wrong envelope must have been living in La La Land. #Moonlight wins best picture. #Oscars#Oscars2017

#Oscars#WarrenBeatty is a class act and doesn't deserve to be embarrassed.

I love Warren Beatty realizing what was happening and just handing the card off, yet still ultimately taking the blame anyway

Even the Academy Twitter handle was fooled and tweeted La La Land as Best Film winner before correcting to Moonlight.

Barry Jenkins said backstage that Warren Beatty brought him the card that said BEST PICTURE: MOONLIGHT on it so he could read it for himself

Promoted
Listen to the latest songs, only on JioSaavn.com
Consolation prizes in this whole sorry mess - La La Land won six Oscars in all, including Best Director for Damien Chazelle who, at 32, is the youngest winner of the award. And John Travolta must be feeling pretty damn pleased that someone else's Oscar flub has eclipsed his 'Adele Dazeem' goof-up while introducing singer Idina Menzel a couple of Oscars ago.