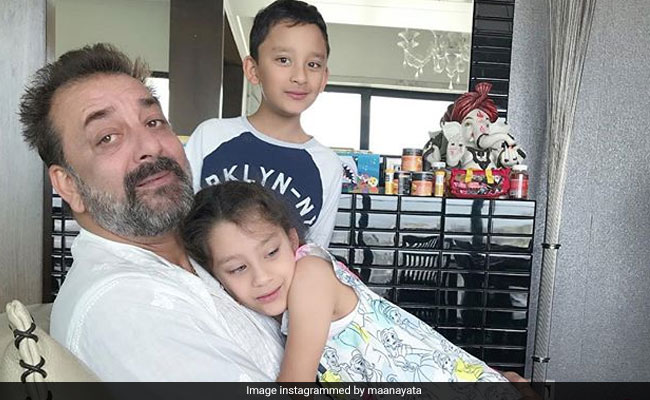 Remember how Maanyata revealed Sanjay Dutt had asked her not to give up while he was still serving his jail-term? In 2016, the 58-year-old actor walked out a free man from Pune's Yerwada jail after serving five-year sentence in connection to the 1993 Mumbai blasts. Sanjay Dutt's sentencing and his jail-term contribute a significant part to Sanju, which is a biopic on Mr Dutt. Ranbir Kapoor plays the protagonist and the film, which documents the highs and lows of Mr Dutt's controversial life, has already hit screens on Friday. On Sanju day, Sanjay Dutt's wife shared an emotional message for her real-life Sanju on Instagram and wrote: "Ruk jaana nahin tu kahin haar kar... kaaton pe chalke milenge saaye bahaar ke."

Maanyata's post was accompanied by a photo of Sanjay Dutt and twins Shahraan and Iqra.

The trailer of Sanju reveals that the actor has not shied away from sharing the details of his much-talked about life, which includes his tryst with the underworld, his many affairs, his past records of drug-abuse and how his jail term helped him evolve as a person. Talking about his time spent in confinement, Sanjay Dutt recently told IANS: "During those days, I learnt how to keep my body in perfect shape, used trash cans and mud pots in place of weights and dumbbells. We also used to have a cultural function every six months in jail where I taught convicts serving out life sentences to mouth dialogues, sing, dance and express themselves through skits."

Talking about the day he walked out as a free man, Sanjay Dutt said: "The day I was released after the final verdict, it was the happiest moment of my life. I was missing my father (Sunil Dutt). I wish he was alive to see me free. He would have been the happiest person. We should never forget our family, they are the pillar of strength always." Sunil Dutt died of heart attack in 2005.

Promoted
Listen to the latest songs, only on JioSaavn.com
When in jail, Sanjay Dutt had one more responsibility - to keep Maanyata motivated to stay strong. "I used to have zillions of tensions but when I used to see him. I remember the first meeting (after he went to jail) he said. 'In my school, I have learnt never give up, it's my motto. I will survive here, you survive outside'," the star wife had told PTI in 2016.