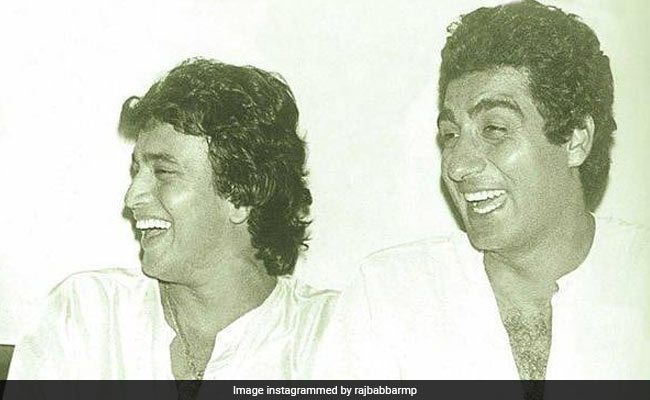 Happy birthday, Mithun Chakraborty! As the actor turned 68 on Tuesday, his Hum Paanch co-star Raj Babbar flipped through the pages of his throwback album and shared a priceless memory on social media. Raj Babbar, who is now a politician, posted a monochromatic picture, in which he can be seen having a hearty laugh with Mithun Chakraborty. They both look very young in the photograph. Sharing the throwback, the Tevar actor called Mithun his "favourite" superstar and wrote: "Birthday wishes to superstar and my favourite, Mithun Chakraborty ji. He came and he conquered the scene! Dancing sensation that he is, he added new dimension to our movies. His sensitive portrayals beginning with Mrigayaa reflect his depth. May he continue to inspire generations."

Birthday wishes to superstar & my favourite #MithunChakraborty ji | He came & he conquered the scene ! Dancing sensation that he is, he added knew dimension to our movies. His sensitive portrayals beginning with #Mrigya reflect his depth. May he continue to inspire generations.

Mithun Chakraborty and Raj Babbar have co-starred in several films in the 1980s and 1990s such as Hum Paanch (which also featured Shabana Azmi and Sanjeev Kumar), Baat Ban Jaye (which released in 1986), the 1989 film Hisaab Khoon Ka, Aakhri Ghulam, Saazish and Dalaal. The duo have also worked together in the 2001 film Khatron Ke Khiladi.

Mithun Chakraborty made his Bollywood debut with the 1976 film Mrigayaa for which he went on to win the National Film Award for the Best Actor. He is best-known for his performances in films like Surakksha, Sahhas, Wardat, Wanted, Boxer, Pyar Jhukta Nahin, Dance Dance, Prem Pratigyaa, Mujrim, Agneepath and Yugandhar among others.