This Pic Of Esha Gupta In The Gym Has LOL Backstory

"Eating samosa and posting this," she wrote 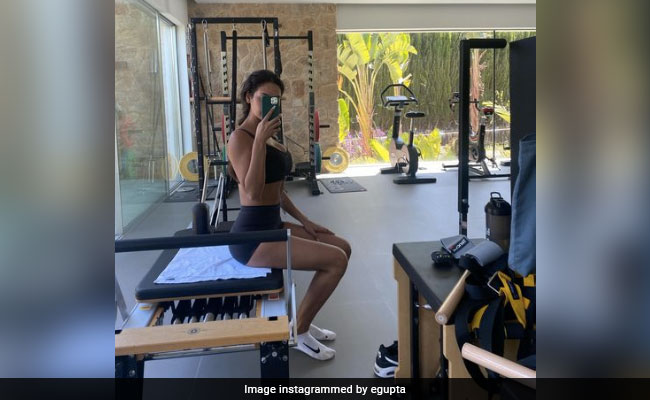 Esha Gupta, on a fine Wednesday afternoon, decided to bless our feeds with a jaw-dropping picture from her gym space. It is a mirror selfie. Esha, who is wearing a workout bra and tights, hides her face behind the mobile phone. Sounds normal, right? Well, please wait for the caption. She simply wrote about dealing with Premenstrual Syndrome (PMS) while revealing the truth behind the picture, “Eating samosa and posting this. #pms.” The pic has spread like wildfire on social media. A fan wrote, “Stunning.” Another said, “Beautiful and fit.”

Esha Gupta was travelling on Tuesday. How are we so sure? She posted a mirror selfie from an airport on her Instagram Stories a while ago.

Esha Gupta's love for travel is no secret. Don't believe us? Just look at her Portugal holiday album. Travel buddy: Boyfriend Manuel Campos Guallar, of course. In this set of pictures from her getaway, she is seen exploring Lisbon with Manuel. Esha also posted a photo of a phone cover, the text on which explained the meaning of the Japanese term wabi-sabi – “the discovery of beauty in imperfection.”

For these pictures of herself and Manuel Campos Guallar from their dinner date, Esha Gupta wrote, “Je ne sais quoi”, in French, which roughly translates to this, in English, “I don't know what.” The actress looks pretty in an orange bodycon dress in the post.

In terms of work, Esha Gupta was last seen in the third season of the web series Aashram, which also featured Bobby Deol, Aaditi Pohankar, Darshan Kumar and Chandan Roy Sanyal. She has also worked in Ashok Nanda's One Day: Justice Delivered, which was released in 2019.

Esha Gupta stepped into Bollywood with the 2012 film Jannat 2. She shared screen space with Emraan Hashmi and Randeep Hooda in the film. Her filmography also includes Commando 2, Total Dhamaal, Rustom and Humshakals. She has Hera Pheri 3 in her kitty.