In the video, the principal cast of the film also speaks about the experience of shooting the song 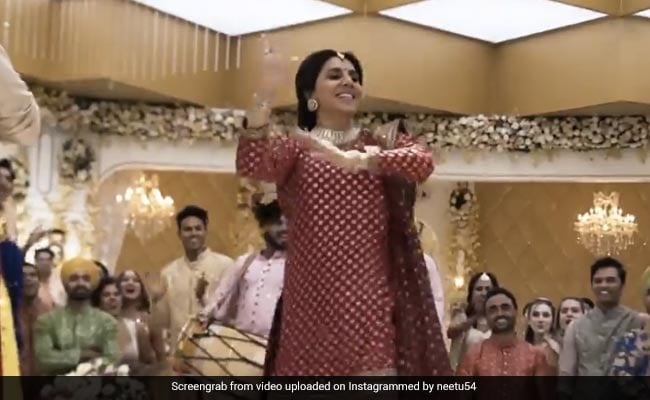 JugJugg Jeeyo, the latest family drama-comedy from Dharma Productions is making all the right noises. The film's trailer and songs have already become hugely popular on the Internet and with fans. The film's lead cast is leaving no stone unturned to promote the film. This includes Anil Kapoor, Varun Dhawan, Kiara Advani and Neetu Kapoor sharing updates about the same on their social media handles. Now, actress Neetu Kapoor has shared a behind-the-scenes video from the shoot of the dance number, The Punjaabban Song. The post contains moments from the shoot of the peppy track along with the cast of the film sharing fun anecdotes.

The video begins with Varun Dhawan talking about the banger track with Neetu Kapoor adding, “It the right kind of song you want to dance to.” Kiara Advani also says, “It is a colourful, vibrant song.”

Taking us through glimpses of the shoot, Neetu Kapoor also spoke about an instance where the choreographer asked the team to stop and watch her do a step. “I was so excited when he said that,” referring to the choreographer, Bosco Martis. Actor Maniesh Paul confirmed this by saying, “Neetu ji is brilliant in this song.”

Sharing the note, Neetu Kapoor said, “The hook step that has got the internet grooving - was a rage behind the scenes too! Watch all the fun that went down with this crazy parivaar during The Punjaabban Song”

A few days ago, Neetu Kapoor was also seen grooving to the fun track with her co-judges on the sets of the reality show Dance Deewane Juniors. In the video, she is seen dancing along with choreographer Marzi Pestonji, actress Nora Fatehi and veteran icon Neetu Kapoor. Also joining them is actress Shilpa Shetty. In the caption, she said, “Got my other on-screen family Nora Fatehi and Marzi Pestonji to do the hook step and we are hooked. And a very special thanks to Shilpa Shetty for joining it and making it more fun.”

Before that, Neetu Kapoor had also shared a bunch of images from the shoot of the song. In the caption, she said, “All smiles with these family members around.”

Neetu Kapoor also dropped her first look poster on Instagram and described her character to be the “heart and soul of this Parivaar.”

JugJugg Jeeyo is Neetu Kapoor's first full-fledged role in a movie after the death of her husband Rishi Kapoor in 2020.