Nasir Review: A Heartfelt Ode To A Man Who Deserves Better

Nasir Review: The screenplay is sparse but the film, shorn of appurtenances, isn't low on impact. 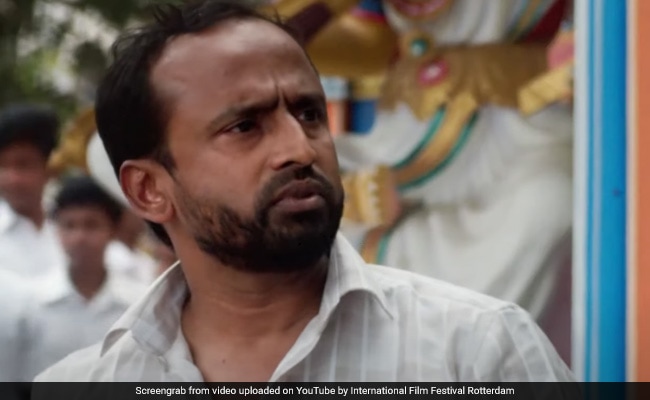 Nasir Review: A still from the film. (Image courtesy: YouTube)

Nasir, directed by Arun Karthick, is one of two narrative features in Jio MAMI Mumbai Film Festival's selection for the ongoing We Are One Global Film Festival

Time stands still, and weighs heavy, in Nasir, the sophomore outing of writer-director Arun Karthick (Sivapuranam). A languorous day in the life of a Coimbatore garments store salesman constitutes the core of the sombre film. But the man's unremarkable diurnal routine flows parallel to a rising tide of bigotry during a religious festival that brings processions and gatherings out on the streets, all keyed up for incitement and bursts of violence.

How long does it take for an unsuspecting ordinary man who has absolutely nothing to do with the turmoil around him to be sucked into its vortex? The Tamil-language film, a work of impressive maturity from a young filmmaker with a singular cinematic sense, presents a dawn-to-dusk account in which nothing appears to happen. Yet a lot does.

Karthick's sparse screenplay draws the audience deep into the universe of the eponymous figure, which is made up of dead-habit chores, while it alludes in dribs and drabs to the severely vitiated environment around him. Hatred is on the rise but Nasir (Koumarane Valavane) is too benign a man, and too immersed in his immediate responsibilities, to fully comprehend the inflammatory nature of the hate speeches being spewed through microphones.

Nasir is a conscientious, sensitive man who writes poetry in a milieu that militates against the softer shades of human expression. But he shows no visible signs of strain even as all the signals around him warn of the venom that is fast spreading in the air.

Nasir, one of two narrative features representing India at the ongoing We Are One Global Film Festival, is shorn of appurtenances. But it isn't low on impact. Karthick employs the art of a fastidious miniaturist to capture the granular details of Nasir's life. He intermittently switches to wider chronicler mode to draw the audience's attention to the anonymity that common people struggling to survive share with marauding mobs biding their time before they strike. The likes of the former hope that being lost in the crowd will protect them from trouble; the latter are sure that they have safety in numbers and can, therefore, wreak havoc at will.

Adapted from a short story by Gujarati-origin Tamil writer Dilip Kumar, which opens at three minutes past six in the morning, Nasir adheres to the time-frame of the written text. A little after Nasir awakens to the lilt of the pre-dawn call to prayers, a table clock in his small house shows 06:03. But from there on, director Karthick dispenses with the time-markers, relying instead on the protagonist's activities to give us a sense of what time of day it is.

Nasir's unexceptional day is presented in the form of vignettes that play out like long-drawn rituals, rich in detailing. It starts with his morning ablutions before he walks to the terminus to see off his wife (Sudha Ranganathan), who is leaving town for three days on an 8.30 AM bus. On the way, he picks up two arm-lengths of jasmine flowers for the woman he describes in a poem as "dearer to me than life".

And then it is time for the store to open. The shutters are raised, the shop is dusted, things are put back in place, and Nasir garlands a Lord Krishna bust placed near the cash-till and a few framed portraits on the wall, one of which is a composite of a mosque, a Hindu seer and Jesus Christ placed side by side.

The day goes on in the same vein as shoppers and other visitors arrive at the store and the salesmen get busy. Nasir runs several errands over the next few hours, which includes a trip to the mosque for afternoon prayers and a lunch-and-siesta break at home.

As he tries to catch a midday wink on a mat on the floor, Begum Akhtar sings Kis se pooche humne kahaan chehra-e-roshan dekha hai/Mehfil mehfil dhoond chuke hai gulshan gulshan dekha hai on the soundtrack, a delectable juxtaposition of familiarity and poesy. In a way, the device also indicates the distance that exists between Nasir gentleness and the deepening bleakness all around.

Offscreen speeches by fundamentalist rabble-rousers clamouring for "one nation, one religion" provide the soundscape that surrounds Nasir's daily routine and one cannot get further from the mellifluence of Akhtari Bai than that.

Filmed in an aptly austere style by cinematographer Soumyananda Sahi, Nasir is infinitely more atmosphere than action. The sound design by Gautam Nair forms the spine of the film. The editing by the late Arghya Basu imparts to the film a languorous rhythm that serves to underline the monotony of Nasir's workaday existence.

At the crack of dawn, while his wife Taj peels onions and his ageing mother scrapes a coconut, Nasir steps out of the house to fetch tea from a nearby kiosk, buys a packet of beedis, helps the wife fetch water from the community tap, returns home, hears some music, brushes his teeth, shaves and bathes.

The routine of his life, like that of all the small people around him, is nothing to write home about. But not for a moment does he complain. His life is full of problems. One of them pertains to money. His mother is old, he has a teenage ward who needs special care, and debts have to cleared. "No hold have I on life neither any grievance," - that is how a poem he recites to his co-workers opens. It refers to "merciless time (that) flows in spate".

Nasir exudes sage-like serenity. He asks his wife before she boards the bus: "Do you really have to go?" That is the only moment when he shows a hint of emotion. He reserves the articulation of his innermost feelings for his poems and a letter that he addresses to his spouse hours after she has left town.

The atmosphere around him is a threat that he does not even take note of even when a co-worker reveals his majoritarian leanings in no uncertain terms. While the world around him is hurtling towards bigotry of manic proportions - this process is revealed in brief capsules that reflect a sense of urgency that is at variance with the deliberate rhythm of the film - Nasir continues regardless at his own unhurried pace.

How time flies, he wonders when he learns that the daughter of an old acquaintance who has just returned from Abu Dhabi is about to get married. How would he know that the time that he talks of is completely out of joint and that the more it flies the worse it is going to get? Nasir is a heartfelt ode to a man who deserves better - and, by extension, to all humans who do.

(Nasir will be available for 24 hours on YouTube from June 6, 7 PM)