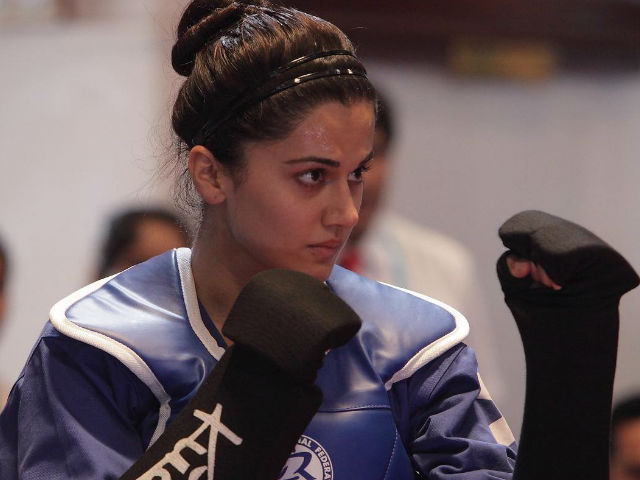 Naam Shabana Box Office: Taapsee Pannu in a still from the film

New Delhi: Naam Shabana's box office report card, which reads Rs 23.80 crores on Tuesday, has been shared by trade analyst Taran Adarsh. Taapsee Pannu's new film has raked in as much as seven crores on its fourth day run at the theatres and made a shade under 30 crores, reported Mr Adarsh. On Monday, Taapsee's spy thriller Naam Shabana made a sum of Rs 2.50 crores, which is the least since it opened to theatres on March 31. Naam Shabana's best single day collection remains that of Sunday's which recorded a sum of Rs 7.27 crores, also reported by Mr Adarsh. Here's a detailed day-wise break-up of the film's collection figures so far.

This is what Taran Adarsh tweeted on Tuesday:

Taapsee Pannu headlines Naam Shabana as secret agent Shabana Kaif and reprises her role from 2015 movie Baby. Akshay Kumar, the star of Baby, also features in an extended cameo in Naam Shabana. In his review for NDTV Movies, Saibal Chatterjee writes: "This isn't a one-woman show. Shabana's cocky senior Ajay Singh Rajput often takes the spotlight away from her. The character is after all played by a much bigger star. Granted that Naam Shabana takes a risk by building an action-packed tale around a woman. But the film is forced to hedge its bets by letting the Akshay Kumar cameo get bigger than cameos are usually meant to be."

Promoted
Listen to the latest songs, only on JioSaavn.com
Taapsee, whose action sequences appear to eclipse that of Akshay Kumar's in Naam Shabana, told news agency PTI that she was "intimidated" to work with the Bollywood khiladi. "I was getting trained by task masters Akshay had assigned for me. He was not present during the training period so I don't know how he is on ground. But he sets the expectation meter very high and it is very intimidating to do an action film where he also is a part of the film as people expect that level of action," PTI reported Taapsee as saying.