Meel Patthar Review: This sublimely multi-layered film embraces the personal struggles of its characters with as much passion as it portrays the manifestations of the social inequities that are an intrinsic part of their existence. 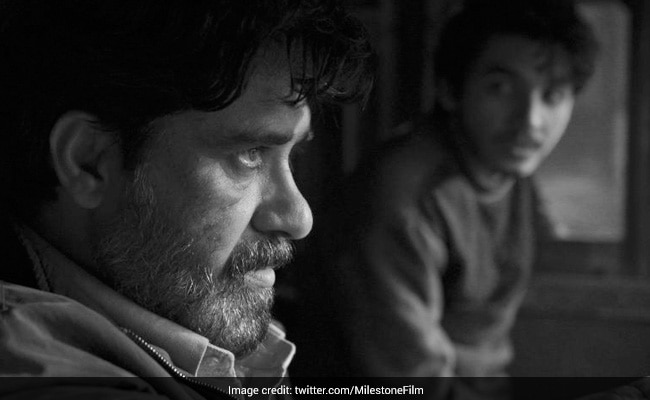 The two main characters of Ivan Ayr's Meel Patthar (Milestone) are Ghalib and Pash. The former is a weather-beaten truck driver who has been on the road long enough not to be overly optimistic about anything. The latter is his understudy, a wide-eyed young man who has no reason yet not to believe that he has an exciting future in a notoriously inconstant industry beset by the vagaries of business, police payoffs, workforce discontent and rising costs of vehicle maintenance.

Neither of the two is a poet. But the names they answer to convey as much about this finely chiselled tableau of a life that is in constant motion and is yet excruciatingly static as anything else that is integrated into the precisely crafted canvas.

This sublimely multi-layered film embraces the personal struggles of its characters with as much passion as it portrays the manifestations of the social inequities that are an intrinsic part of their existence. Meel Patthar is suffused with poetry. The film's aching lyricism is, however, tempered by the inevitably prosaic nature of the protagonist's calling.

While Ghalib is acutely aware that he has no power over the road that he has taken and that there might be no spring of regeneration after another winter of discontent, the young man under his tutelage looks up to him. His track record behind the wheel is after all second to none.

Ghalib, in one wonderfully written sequence, is intent on convincing the impressionable Pash (who mentions the former's jazbaa, passion, for the profession as a source of inspiration) that nobody ever does anything selflessly. Everything that we do and choose to see is dictated by self-interest, the seasoned trucker philosophizes. He punctuates the drift of his cynicism with means imagistic. From afar, even a shadow looks like water, he says.

That one line, like many others strewn across the film, captures the delicate spirit of Meel Patthar. It is simple, to the point, and quietly evocative in the manner of a diligently composed and metered verse. The film, which premiered in the Orizzonti section of the ongoing 77th Venice Film Festival, oozes humanism from every pore as it brings to the fore sweating people whose plight we would otherwise not even deign to pause and ponder over.

Meel Patthar is a lamentation for a world where we have stopped listening to each other. After a drunken fracas with one of the neighbours in the residential apartment block that Ghalib has a flat in, his best pal and longtime colleague cites the example of a street urchin who knocks ever so often on the truck window at a traffic signal begging for money. We know he is there, but we pretend he isn't, the friend confesses.

Ghalib, played by Suvinder Vicky, a steady-as-a-rock actor whose face and eyes map the many mishaps that the character has weathered, has been on the move all his life. He is the company's star driver having completed 500,000 kilometers. But this profoundly moving character-study is far less about the milestones this man has reached than about the ones he has missed.

He hasn't understandably grown roots anywhere despite belonging to a Punjab village that his forefathers helped build and owning a house of his own in Delhi. He is a poignant embodiment of displacement and detrition, a phenomenon that affects not just him but almost everybody in his orbit.

The dust that his travels on the highways and gravelly roads whip up envelopes every aspect of his existence. He clearly has no control over his comings and goings. The first time we see him in his own home, the envelope he picks up at the door on the way in has a layer of dust on it. So does the dining table.

In his village - Ghalib has been summoned there to negotiate a compensation deal with his dead wife's family - an elder informs him that a new road has been paved all the way to his field and he can now drive up there in his truck. We'll see when that happens, he replies coldly, not surprising for a man whose destinations aren't his for the asking.

In a company that Ghalib reaches one night to pick up goods for delivery, the only soul in the warehouse, a man with a fractured arm, tells him that the enterprise has gone under and this is going to be its final consignment. A part of a liquor shop, another of his destinations, stands on the site of a musical instruments store that went kaput.

Such tales of distress abound in this minimalist film crammed with moments of eloquence that reverberate long after the film has played out. Ghalib is troubled by a persistent back ache made worse by the cold of winter - a metaphor for what life on the road has 'rewarded' him with.

It only gets worse as we travel down the pecking order and run into the people in Ghalib's life. The film releases information in dribbles but every little detail it provides is an intrinsic, illuminating part of the larger tapestry. We learn as we go along that Ghalib's deceased wife never stopped missing her village in Sikkim, that a trade unionist (played by poet-activist Aamir Aziz), who is leading a loaders' strike at Ghalib's transport firm, talks about crops back in his village (in eastern Uttar Pradesh or Bihar, going by the man's lingo) being washed away by flood waters.

Ghalib's Kashmiri neighbour (Pavitra Mattoo), a mother of a little boy, reminisces about the daily chore of clearing snow from around her home in the Valley at the peak of winter. She is now uprooted and, like everybody else in the film, struggling to adjust. Yes, everybody, not the least Ghalib's old co-worker Dilbaug (Gurinder Makna), who has been summarily dismissed from service by the owner's son (Akhilesh Kumar) owing his failing eyesight, has to come to terms with a life-altering loss.

Ghalib himself stands to lose the life - and job - that destiny has chosen for him when he is asked to train the eager-to-learn Pash (Lakshvir Saran). Having seen the fate that has befallen Dilbaug, Ghalib fears that he could be the next to face the axe.

Constant negotiations define Ghalib's life. A back spasm that he suffers when standing in for the workers on hartal assumes worrisome proportions. But he cannot hold it up as an excuse to skip assignments. He cannot afford to. He feels it is unfair that the blame for his wife's death has been put entirely on him, but he agrees to compensate his sister-in-law (Gaurika Bhatt) and her father. The panchayat grants Ghalib a month's time to organize the funds.

A month for a man in a stop-go line of work is akin to a lifetime. His fears and misgivings fill out the film with brilliant flashes of insight into the human condition in a way that make Ivan Ayr's second film a genuine milestone, a worthy follow-up to the gritty Soni.