"Thank you so much guys for all the concerned messages. I just have an eye infection, which has caused me this bruise," said Mandana Karimi 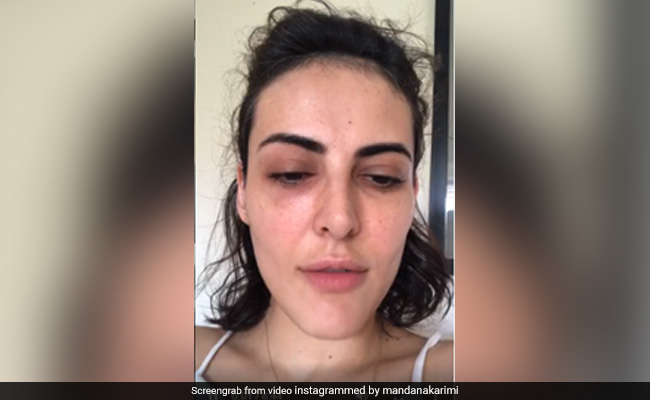 Mandana Karimi in a still from her video (courtesy mandanakarimi)

Model-turned actress Mandana Karimi, on Tuesday, responded to messages of concern from her fans and clarified that she doesn't have coronavirus but is suffering from an eye infection. In an eight-minute-long Instagram live session, Ms Karimi revealed that she decided to interact with her fans after concerned messages poured in on her feed, asking about her health and if she has been diagnosed with COVID-19. Ms Karimi appeared in the Instagram session with a bruised eye but added a face-filter soon enough, telling her fans that she's more comfortable that way. "Keep it real. The ugly truth," she captioned her video while posting it on her feed. "Thank you so much guys for all the concerned messages. I'm okay, I'm fine. I just have an eye infection, which has caused me this bruise," she said. Later in her video, Ms Karimi said that she has been busy cleaning the house with disinfectants and may have infected her eye sometime during her cleaning chores.

"And no, I haven't got corona. I just got an eye infection. I'm taking care of it with my doctor," said the actress and added that she has been advised rest. The Roy actor also made a plea to her Instafam about jumping to conclusions too soon: "Guys, educate yourselves, before making any suggestions for anyone... when you not even know exactly what the symptoms are for any kind of sickness. You can't be a doctor and you can't be making assumptions."

The 32-year-old actress also shared a message for haters, who attempted to spam her Instagram live session: "Spread love. This is for those idiots out there, who are negative and coming to live conversations, they put so much sh** out there."

In a separate post, Mandana Karimi wrote: "Imagine if we loved people as they are, without any judgement about their nationality, skin color, religion or simply why they putting a real picture of themselves out there."

Do you believe what you see? Swipe to watch the next video !! Don't let filters fool you , same girl,same light and same frame... Imagine if we loved people as they are,without any judgement about their nationality,skin color,religion or simply why they putting a REAL picture of themselves out there !? Guys corona is enough to make our life's a miserable and scary place !!!! Spread love if you don't have kind words keep quiet ( we all are suffering just in different levels) Our world needs LOVE more than ever #quarantine #thoughts

Mandana Karimi, who has featured in several adverts, starred in films such as Roy, Bhaag Johnny and Kyaa Kool Hain Hum 3. She was the second runner up of Bigg Boss 9. She joined the TV series Ishqbaaz in 2018 with a negative role. Mandana Karimi got married to businessman Gaurav Gupta in January 2017 and filed for a domestic violence case six months later. She reportedly later withdrew the case.