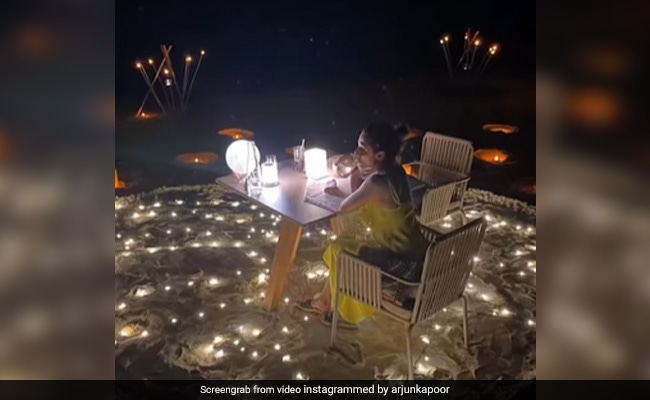 A still from the video posted by Arjun Kapoor. (Image courtesy: arjunkapoor)

Arjun Kapoor and Malaika Arora spent the last few days basking in the warmth of the Maldivian sun. The couple kept their fans abreast of all that was happening on the trip by posting some fun pictures and videos from the vacation. From following each other around on the island to dining in some extremely romantic settings, the duo set #couplegoals one Instagram post at a time. Now, Arjun Kapoor has shared a loved up video, confessing that he too, like the rest of us, is a fan of Malaika's Arora's “vibe”. To quote him: “She is a vibe … and it's on fleek!”

The video is just as fun as the caption. It is a montage video of the couple heading to their dinner venue which was on the beach. A table was laid out in the centre of lights arranged to form the shape of a heart. In particular, Arjun had eyes only for Malaika, who posed and strutted like a diva with the dark, starry sky above her. The actor added the popular Harry Sandhu track Bijlee Bijlee in the background.

Before that, the fun couple was also seen indulging in some exercise in the pool. Well, to be more specific, Malaika Arora had Arjun Kapoor and herself burn all their holiday calories while in the Maldives itself. “When the girlfriend is a tougher taskmaster than your trainer,” Arjun Kapoor said, tagging his trainer to add that he was “working out even on holiday” thanks to Malaika Arora.

And, Arjun Kapoor too shared a series of selfies and declared himself the king of selfies in the caption. “Hello from the Selfie King,” he wrote, sharing a bunch of pictures.

Malaika Arora too shared pictures and videos from the Maldives. She shared a photo of herself swimming in the blue waters. She wrote in the caption, “From ocean blues to Monday blues...either way...it looks good on me,” and we cannot help but agree.

Malaika Arora rose to prominence thanks to her appearances in music videos for songs such as Gur Naalo Ishq Mitha, Chaiyya Chaiyya, and Munni Badnaam Hui. Gunday, 2 States, and Sandeep Aur Pinky Faraar are among Arjun Kapoor's most well-known films.