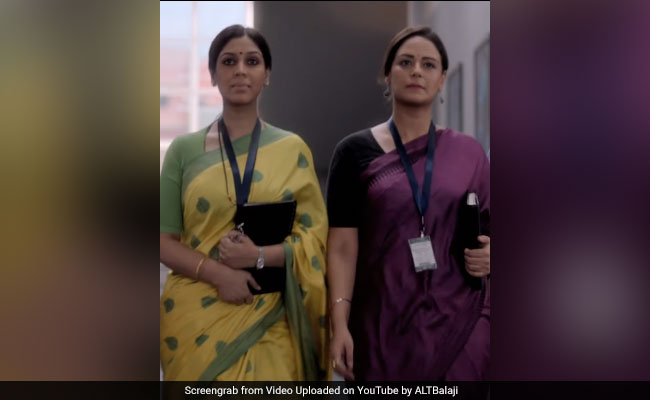 Sakshi Tanwar and Mona Singh in a still from the teaser. (Image courtesy: YouTube )

Ekta Kapoor's ALTBalaji dropped the teaser of its upcoming web-series M.O.M. - Mission Over Mars on the Internet on Wednesday. The show, which is a fictional adaption of India's journey to Mars right from inception to execution, features Sakshi Tanwar, Mona Singh, Nidhi Singh and Palomi Ghosh in lead roles. The teaser features the actresses as women scientists, who go beyond impossibilities to launch the Mission Over Mars. The teaser of the web-series arrives a day before the release of Akshay Kumar and Vidya Balan's Mission Mangal, a film based on India's Mars Orbiter Mission. The teaser shows glimpses of all the actors' performances, especially that of Sakshi Tanwar and Mona Singh, who are dedicated to prove India's capability by successfully launching the mission.

Sharing the teaser of M.O.M. - Mission Over Mars on social media, ALTBalaji captioned it: "Kuch udaanon ke liye pankh nahi, jazbe ki zarurat hoti hai! This is the story of India's incredible journey to Mars." They also released a disclaimer which read: "#MissionOverMars is a fictional adaptation of the real life heroes at ISRO who worked on Mangalyaan. As per our legal and contractual obligations we cannot use actual names or images of either the people, objects or agencies in any publicity material."

Sakshi Tanwar will play the role of an independent woman scientist Nandita. Being a strict disciplined Mission Coordinator of M.O.M. Speaking about her role in the web-series, Sakshi said in a statement: "M.O.M is an impressive web-series completely dominant with women-centric content. I am extremely overwhelmed that ALTBalaji gave me the character of Nandita Hariprasad, which is a senior scientist at ISA," reported news agency IANS.

M.O.M. - Mission Over Mars, directed by Vinay Waikul, will be streaming on both ALTBalaji and Zee5.