'Luke Perry Was My First Crush': Tributes From Beverly Hills 90120 Co-Stars And Others

The Beverly Hills, 90210 actor was hospitalised on Wednesday after suffering a stroke 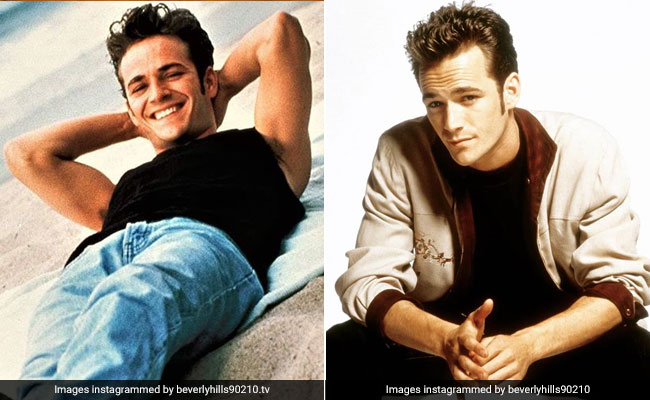 Kind words, thoughts and condolences poured out on social media Monday as colleagues and fans reacted to actor Luke Perry's death at age 52.

The Beverly Hills, 90210 and Riverdale actor was hospitalised on Wednesday after suffering a stroke. Additional details concerning the actor's death were not readily available. Days after he was hospitalized, his former co-star Shannen Doherty gave an emotional interview to "Entertainment Tonight," saying, "I can't talk about it here because I will literally start crying, but I love him, and he knows I love him."

"It's Luke, and he's my Dylan," she added in reference to Dylan McKay, the brooding 90210 character who propelled Perry to teen idol status in the 1990s. He more recently played Fred Andrews, Archie's father, in the CW drama Riverdale and served as the moral compass of the show. Riverdale's executive producers - Roberto Aguirre-Sacasa, Greg Berlanti, Sarah Schechter and Jon Goldwater - said in a statement that they were "deeply saddened" by Luke Perry's death.

In a tweet from his personal account, Aguirre-Sacasa added: "So heartbroken about Luke. He was a father, brother, friend, and mentor. Each night before he had to shoot a scene, he'd call me and we'd talk about . . . everything. I will miss those calls. And my heart goes out to all his family and friends."

The statement read: "Luke was everything you would hope he would be: An incredibly caring, consummate professional with a giant heart, and a true friend to all. A father figure and mentor to the show's young cast, Luke was incredibly generous, and he infused the set with love and kindness. Our thoughts are with Luke's family during this most difficult time."

Social media was filled with emotional tributes to Perry within minutes of the news breaking.

Molly Ringwald, a fellow teen idol, who played Perry's estranged wife on Riverdale, tweeted that her "heart is broken. I will miss you so much Luke Perry. Sending all my love to your family."

Doherty and Perry's 90210 co-star Ian Ziering tweeted: "Dearest Luke, I will forever bask in the loving memories we've shared over the last thirty years. May your journey forward be enriched by the magnificent souls who have passed before you, just like you have done here, for those you leave behind."

"My heart is broken. He meant so much to so many," Garth, whose character dated Perry, told the magazine. "Such a very special person. I share my deep sadness with his family and all who loved him. Such a terrible loss."

Carteris said she was "absolutely heartbroken. Luke was a tremendous force in the lives of so many. He was a very sensitive soul who was kind, generous and he fought for the underdog. He was a strong voice and an advocate who will be so missed by all who knew him. He has left his mark - never to be forgotten. My heart goes out to his family, friends and fans around the globe."

She also tweeted: "Dearest Luke - I am so heart broken and at a loss for words. You my friend were a mighty soul and have left your mark. My love and prayers to the family and all who loved you. RIP."

Emma Caulfield Ford, another 90210 cast member, remembered Perry mentoring her on the set.

"My first day on 90210 Luke brought me under his wings and made me feel welcome . . . I felt like I had an ally in my corner," she tweeted. "You set a tone and made sure I could thrive. It was my first real gig and your kindness was rarely matched. God bless you Luke. You're with the rest of the angels."

"One last thing about Luke, in a time where the #MeToo movement has cast a deserved light on the bad men who have mistreated women in Hollywood and elsewhere, let it be remembered that Luke was a real man - kind, supportive, open hearted vulnerable, strong, and fair," she added.

Leonardo DiCaprio, who shares the screen with Perry in Quentin Tarantino's upcoming movie Once Upon a Time In Hollywood, tweeted: "Luke Perry was a kindhearted and incredibly talented artist. It was an honor to be able to work with him. My thoughts and prayers go out to him and his loved ones."

Joss Whedon, who directed Perry on his show Buffy The Vampire Slayer, remembered discussing old movies with the actor: "The first time I met Luke Perry we talked about what kind of movie we wanted 'Buffy' to be," he tweeted. "I asked if he'd ever seen Near Dark and he gave me a look of 'How Dare You Sir' and I knew we'd get along. Funny, committed, and always gracious. He shouldn't be gone."

Leslie Grossman, who worked with Perry on the show What I Like About You, shared her own humorous encounter with the actor.

"When I was lucky enough to work with Luke Perry I told him about the pillow of his face I used to sleep with and he yelled 'You are such a weirdo!' at me and it was the best," she tweeted. "Sending love to his friends and family."

Those from the Ohioian's home state also showed love Monday. Sen. Sherrod Brown, D-Ohio, tweeted that he was "very saddened by this loss."

"Luke Perry was not only a talented actor - but a warm, kind person who made his home state proud. My thoughts are with his friends, family, and loved ones," Brown added.

Seth Green, who entered show business around the same time as Perry, said he was "crushed."

"Luke Perry was truly a great guy," Green tweeted. "Warm, kind, generous and hard working. We met very young, I witnessed the grace with which he became a pop icon and parent. He's been an awesome example of how to stay decent in a swirl of crazy. Love to his family."

"I'm stunned," tweeted Two And A Half Men actor Jon Cryer. "Such a lovely guy. With a wonderful sense of humor about fame and the pitfalls of showbiz. This is just awful."

"I wrote him fan letters. I had posters of him," she tweeted. "He was IT. He was my teenage dream. His passing at the age of 52 is truly devastating. My heart goes out to his family and loved ones."

She was not the only one who liked the actor from afar.

"Luke Perry was my 1st crush," tweeted actress Olivia Munn. "Eh, more like obsession (I wore pins w his face on them to school) I used to dream of making it to LA just to meet him. I never got to, but I've always heard he was a really great person. Praying for his family and kids."