New Delhi: Superstar Shah Rukh Khan is on a multi city promotional tour for his upcoming film Raaes. For the Delhi promotion, Shah Rukh, 51, ditched his preferred air travel in favour of a train journey. The actor and Raees director and producer Rahul Dholakia and Ritesh Sidhwani are on the train from Mumbai to Delhi. They boarded the August Kranti Rajdhani Express from Bombay Central Railway at 5.40 pm. The train reached Delhi's Hazrat Nizamuddin station on Tuesday morning. Excited much? Watch this space as we travel with Shah Rukh Khan from Mumbai to Delhi. Like Raaes bhai said: "Aaraha hu main."
Jan 24, 2017 14:20 (IST)
Batteny nahi bolneka!

The train ride w/ @RaeesTheFilm team & @iamsrk is 1of my most memorable trips in India thus far!Will never forget!Srk fans u r so amazing! pic.twitter.com/X67MUcZzt7

Madness of @Iamsrk in #Mathura#RaeesByRailpic.twitter.com/SZF03M2mmG

Our lovely #LaiLa@SunnyLeone Is Also There in Train Journey
Just some hours more for #RAEES
Be ready pic.twitter.com/r2qDIHPe8e

Thank u all the students...the future of India to be here at the Kota station. All the girls especially...love u immensely & wish u the best.

Thank u Gujarat. This is so beautiful. Thanks for waiting for Raees Surat. pic.twitter.com/SL8bMGhdcg

Jan 23, 2017 20:30 (IST)
Shah Rukh Khan received a royal welcome at Vapi. The crowd pushed forward to get a glimpse of the superstar. SRK waved to his fans and distributed some gifts as well
Jan 23, 2017 19:28 (IST)
Before leaving for the station, SRK told the press that he took the train to Agra with his first salary. When he went to Mumbai the first time, he didn't realise the train becomes a local when it enters the city and was scolded by others for taking up a whole berth
Jan 23, 2017 19:19 (IST)
SRK being escorted through the crowd to the train earlier 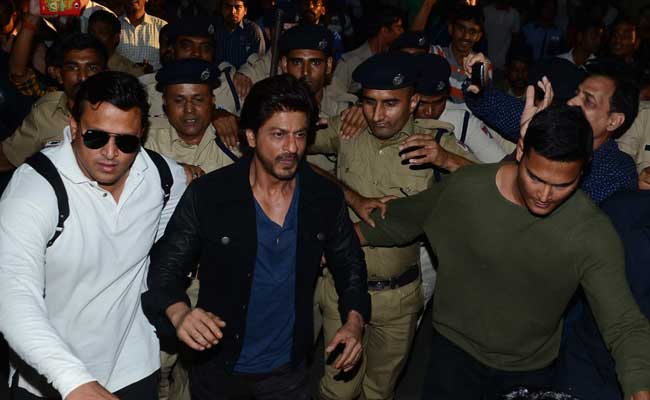 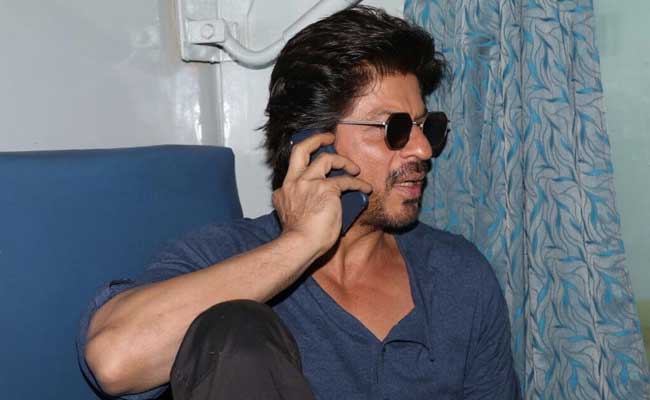 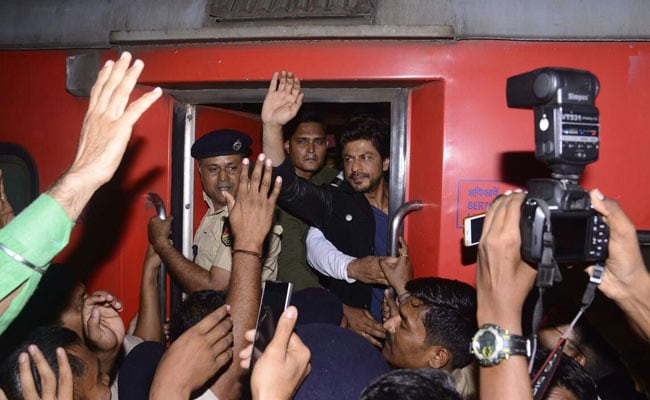 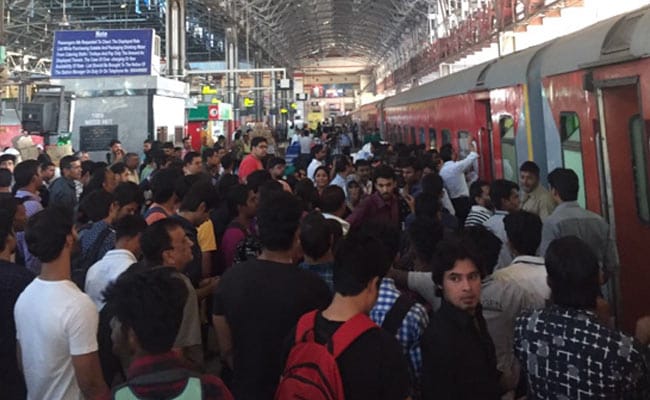 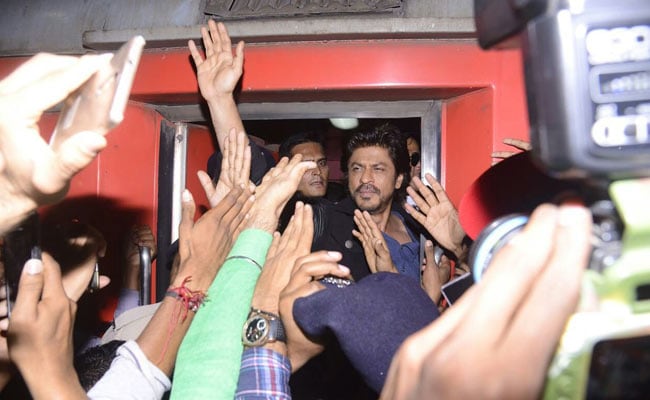 NDTV's Beverly White is on the train but if any of you are rather jealous that she's achieved quite the coup with a coupe next to SRK, let her burst that bubble - several compartments separate them but as the evening goes on she's hoping that she will have the pleasure of trainspotting and celeb spotting, all in one go, with SRK

A superstar also has to stick to a timetable when it comes to trains. SRK made it onto the train just by the skin of his teeth and the superstar is now on track for his grand railroad journey

The train in which Shah Rukh Khan will be traveling to Delhi is here. #RaeesByRail (VC : @AbiraDhar ) pic.twitter.com/QfRNZyurBh

Jan 23, 2017 17:23 (IST)
"Is he (SRK) actually travelling the entire distance by train? With passengers?" someone tweeted. The answer is yes, and SRK will also be getting off at stations on the way to interact with the crowd on the platform - Surat, Baroda, Kota, Sawai Madhopur, Mathura, are you ready?
Jan 23, 2017 17:12 (IST)
The scene at Mumbai Central is one of great excitement with SRK expected any minute. Cries of 'Shah Rukh, Shah Rukh' pierce the air. The August Kranti Express is scheduled to leave at 5.40pm
Jan 23, 2017 16:59 (IST)
SRK and Indian Rail have a history, from the climax scene of DDLJ to Chaiyya Chaiyya in Dil Se to Chennai Express
Jan 23, 2017 16:47 (IST)
The train SRK will be catching

And we're all set! The train is here! @iamsrk will be arriving soon! #RaeesByRailpic.twitter.com/MWhEzBnJ8G

Jan 23, 2017 16:08 (IST)
In another tweet, SRK revealed that he will be repeating (in reverse) the journey he originally made to make it big in Bollywood

Jan 23, 2017 15:54 (IST)
SRK is using the time he has before he boards the train to reply to folks tweeting him about Raees. To a question on whether the film will pull in Rs 200 crore, SRK responded: 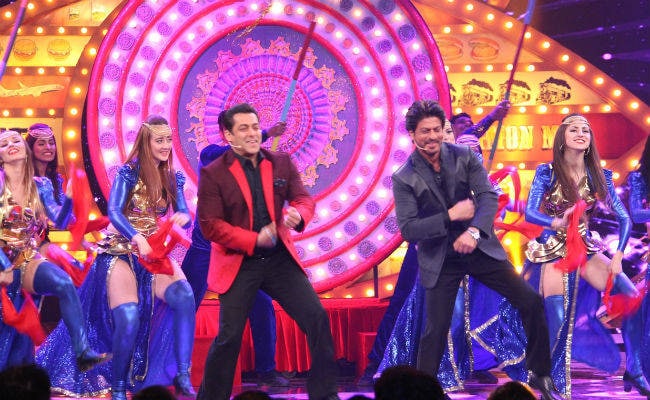 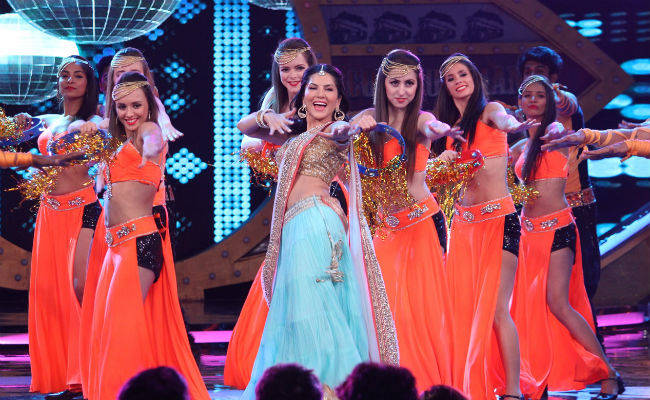 Jan 23, 2017 14:18 (IST)
Raees stars SRK as the title character, a boot-legger named Raees Alam whose empire is challenged by a cop played by Nawazuddin Siddiqui. The film is set in 1980s Gujarat
Jan 23, 2017 14:16 (IST)
Shah Rukh Khan is packing his bags for New Delhi, where he will be promoting his new film Raees. But he doesn't have a flight ticket booked. SRK, 51, director Rahul Dholakia and producer Ritesh Sidhwani will be boarding the August Kranti Express from Mumbai this evening around 5pm and will chug into Hazrat Nizamuddin station tomorrow morning. Raees opens on Wednesday

"I Miss India So Much": Sonam Kapoor's Postcard From London