Kuruthi Review: Roshan Mathew is impressive. Much more thought needed to have gone into the role essayed by Prithviraj, who does his best with what the writing offers him. 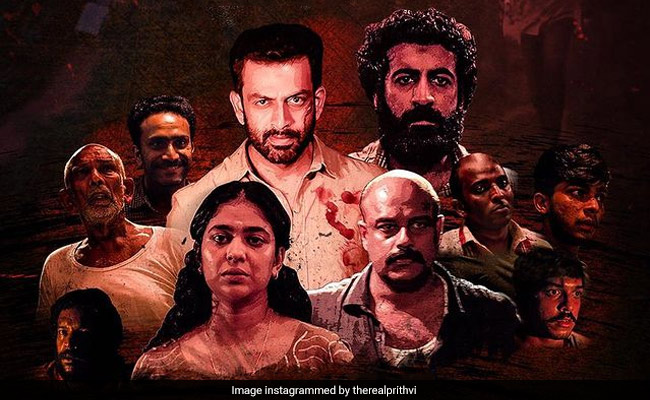 India is on the cusp of its 75th year of independence. Bollywood has two movies lined up for the occasion. One takes us back to a war waged in 1971, the other showcases a heroic martyr of a military conflict that erupted over two decades ago. No surprises there.

Trust Malayalam cinema to strike out in a different, and contemporaneous, direction. Manu Warrier's sophomore effort Kuruthi (Holy Slaughter), out on Amazon Prime Video four days ahead of August 15, explores, through a microcosmic prism, how freedom has panned out for a nation of 1.3 billion people in the vice-like grip of a myopic, deleterious religious binary.

Produced by Supriya Menon under star Prithviraj Sukumaran's home banner, Kuruthi is about the war within that threatens to drag India back to the dark ages. The thriller plays out for the most part in a single house over a 24-hour period that sees two small groups of men pitted against each other in a violent battle of attrition.

The larger purpose of Kuruthi cannot be called into question, but the film is unable to evade a muddled denouement that rests on a false equivalence between the depredations of a brute majority and the retaliations of a minority fighting with their backs to the wall.

The high-minded pretensions of the screenplay by Anish Pallyal - he wrote Prasanth Vijay's lovely Athisayangalude Venal (The Summer of Miracles, 2017) - give way to hackneyed methods. The film, which draws much of its inspiration from current events, is loosely reductionist and provides an oversimplified account of what is going on in today's India.

The times are such that a boy who has just killed an old, innocent shopkeeper can make bold to wonder aloud: "Who are the actual powerless ones in this country? These infiltrators? Or us?" A riposte from a policeman - "Save your speech for some stupid WhatsApp group" - seeks to restore a semblance of balance. Kuruthi does not pursue the cop's line of thinking persistently enough.

The thoughts that most of the other characters articulate are dipped in venom and the film has moments that seem to be on the brink of delivering disturbing, hard-hitting twists. Kuruthi does not, however, turn into genuinely gripping fare because the principal antagonist, a coldblooded Muslim militant played by Prithviraj Sukumaran, is incapable of going beyond a set of predictable impulses.

He is more a pre-programmed automaton than a flesh-and-blood human although, almost in the same breath, he talks about his devout father who paid the price for not being able to hurt even an ant and his own act of violence that led to his unceremonious ouster from France.

The 'hero' of Kuruthi is Ibrahim (Roshan Mathew), a devout young man who isn't sure of the payoffs of piety. He is in mourning for his wife and daughter who perished in a landslide a year ago. He continues to live in his old house on a hill because he does not want to let go of the memories.

There is only one other house in the area. It is inhabited by Sumathi (Srindaa) and her elder brother Preman (Manikandarajan), who, too, lost his wife in the landslide. Besides performing household chores for the family, Suma cooks lunch and dinner for Ibrahim and his cantankerous father Moosa (Mamukkoya) and his impressionable brother Resul (Naslen).

Towards the day that the action pans out - it begins with Ibrahim waking up at the crack of dawn in preparation for his morning ablutions for his prayers at a nearby mosque - a knock on the door as the family awaits the delivery of dinner triggers a chain of events that quickly spiral out of control.

The ground for this flashpoint is prepared gently. The two-hour film provides firm suggestions of the gathering storm in its first 20-odd minutes. There is strife in the air. A Muslim shopkeeper has been killed by a young boy. A nest of wasps and a snake from a temple - both of which come into play, if only tangentially, later on in the film - are mentioned as the first rays of the sun begin to dispel the pre-dawn darkness.

A community elder asks: "Where is the country headed?" The answer is provided in a subsequent conversation. One group has arrogance of power and the other has the courage that stems from knowing that they have nothing to lose, the elderly man says. We are caught between the two and nobody cares about us, he surmises. "My mind is full of doubts," is all that Ibrahim can muster in response to that dire prognosis.

Back home, Ibrahim's crotchety father, bound to a reclining armchair and dependent on a urinary catheter, gets into a slanging match with his younger son, a boy seething with anger over the wrongs that he believes his co-religionists are subjected to.

As the evening wears on, sub-inspector Sathyan (Murali Gopy) barges into the house with a handcuffed murder accused, Vishnu (Sagar Surya), following an attack on a posse of policemen escorting the killer through the forest.

The bridge out of the jungle, damaged in the floods, is still unusable and a trek through the alternative route to a police station several hours away is fraught with danger. The SI decides, without so much as a by-your-leave, to hole up in Ibrahim's home until daybreak.

As the sub-inspector chalks out his plan for the night, Suma arrives with dinner. The cop forbids her to leave. She serves the men rice and beef curry. Vishnu, free momentarily of his handcuffs, gorges on the food. Resul takes a dig at him. The two hot-headed teenagers, dripping vitriol, argue over their religious beliefs.

It becomes apparent soon enough that the men who attacked the police party in the forest aren't going to give up. Over one-third of the way into the film, the star of the show, Prithviraj Sukumaran in the guise of Laiq, shows up along with Ibrahim's friend and Resul's mentor Kareem (Shine Tom Chacko).

As the tension mounts for the men and Suma, Abinandhan Ramanujam's camera flits from face to face to capture a gamut of emotions. At other times, it glides across the room and the house to reveal elements that define the people who live there.

The performances are from the top drawer. Roshan Mathew is impressive as the taciturn Ibrahim. The script does well to lend substance to the secondary characters. Srindaa and Mamukkoya make the most of the opportunities and steal many a scene. Much more thought needed to have gone into the role essayed by Prithviraj, who does his best with what the writing offers him.

Kuruthi deserves applause for daring to point to the flip side of independence - the kind that leads people to believe they can do anything to anyone when their sentiments are hurt. If only the critique of religious intolerance had been less facile, the film would have hit home much harder. That would have been the difference between what Kuruthi is and what it could have been.

Shershaah Review: Sidharth Malhotra Has What It Takes But A War Hero Deserves A More Energetic Film