Krystle D'Souza, who checked in to a Mumbai pub with her friends recently, must have bumped into Hardik Pandya, clicked a photo 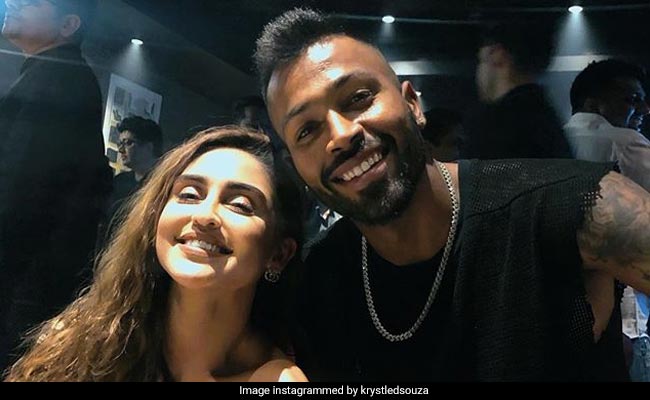 TV star Krystle D'Souza recently Instagrammed a photo with cricketer Hardik Pandya on her feed, only to be trolled to no end. Krystle, who checked in to a Mumbai pub with her friends recently, must have bumped into Hardik, clicked a photo and Instagrammed it with the caption: "Mere bhai jaisa koi hard ich nahi hai," which particularly irked the Internet. Not only to Krystle, but netizens also directed hateful comments and vile remarks towards the cricketer citing his sexist remarks on the controversial episode of Koffee With Karan from January. "I would be rather scared if I had such a creepy brother," said a user while another added: "He is as he was" and these are only the politest of the remarks posted while others are too vile to be reproduced here.

Meanwhile, Aparshakti Khurana surfaced on Krystle's comments section to reply to one particular troll: "We all love Hardik because he is a performer. You should rather encourage the Indian Team, specially before the World Cup," he wrote. Krystle D'Souza also jumped to Hardik Pandya's defence as she responded to Aparshakti and wrote: "That's so well put. People are so mean and obnoxious and just because they are sitting behind a screen typing, they think they can get away with anything! I guess ignorance is bliss in this case. Their words makes no difference to his superb performance... but, thank you." Hardik Pandya is currently plying his trade for Mumbai Indians at the ongoing Indian Premier League 2019.

On her Instagram, Krystle D'Souza also shared about her night with friends and co-stars Sonal Chauhan, Karishma Tanna and others.

Earlier this year, fellow cricketers Hardik Pandya and KL Rahul were incinerated by the Internet for their remarks on an episode of Karan Johar's talk show. The cricketers issued "unconditional apologies" while they remained suspended for a brief while. Streaming giant Hotstar also pulled the Koffee With Karan episode down from their website and days later, Karan Johar told NDTV: "I feel very responsible because it was my show, it was my platform. I invited them as guests and so the repercussions of the show are my responsibility."