Koozhangal Review: As Close To Being A Masterpiece As Any Debut This Millennium

Koozhangal Review: Presented by Nayanthara and Vignesh Shivan, a piece of pure cinema that strips down the medium to its bare bones with a splendid sense of balance. 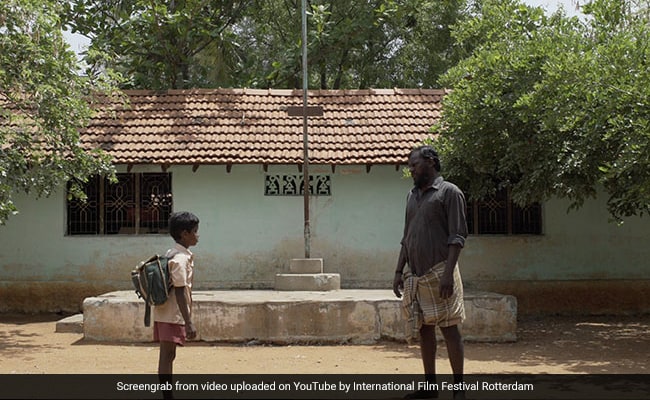 The opening shot of first-time director P.S. Vinothraj's Koozhangal (Pebbles) is as stark as it is evocative. We watch a bird building a nest on a bent, shaky branch - a little winged creature engaged in the rudimentary act of rustling up a safe shelter. But does the branch have the strength to bear the weight of the home the bird is stitching together in the fond hope that it will endure? Just about.

For young Velu (Chella Pandi), son of an abusive and alcoholic man, Ganapathy (Karuthadaiyan), home is, however, only a physical space. It does not ensure emotional security. The Tamil film, which plays out over half a day, has him more on the road, under the blazing sun in a water-starved, rocky region, than under a roof. The boy's life see-saws between anger and despair.

The landscape - harsh, parched, sweltering - is a key element in the searing film. There are things much worse here than the unbearable heat in the air: patriarchy, impoverishment and violence against women and children. Koozhangal, presented by Nayanthara and Vignesh Shivan, is a piece of pure cinema that strips down the medium to its bare bones with a splendid sense of balance to reveal a state of human existence that has been engulfed by sheer hopelessness.

Ganapathy (Karuthadaiyan), Velu's father, drags the boy along on a trip to fetch his estranged wife back from her maternal village. Not that the man is missing his wife. He needs her around to take care of his home and children. Velu detests his father. Ganapathy asks: Do you like me or your mother? The boy does not answer. He does not need to. What he thinks of his boorish, alcohol-addled father is as clear as daylight.

In Koozhangal, which abounds in such quiet yet strikingly eloquent moments, writer-director Vinothraj uses the camera like a sharp scalpel that makes its way deep into the flesh and prises open the innards of an unforgiving space somewhere in an arid part of Tamil Nadu where life, like the bird's nest on a frail, swaying branch in the film's first shot, hangs by a tenuous thread.

Koozhangal is composed of stunning widescreen frames, which alternate between revealing precise visual and situational details loaded with meaning and merely alluding to, if not concealing, much else to encourage us to attempt a deeper understanding of the scarred mind of Velu, who must learn to negotiate frequent personal upheavals without being rattled by them in order to survive the daily ordeal of dealing with a father driven by impotent rage.

The acute scarcity of water and the precarious status of women go hand in hand in the area. Water and women give and sustain life and both are at the receiving end of inimical forces - the former of Nature's vagaries caused by increasing desertification, the latter of toxic virility.

On their journey to the village of Velu's mother, father and son take a bus. A woman boards the vehicle with three pots of water. She has to buy tickets not just for herself but also for the three little receptacles with her. Neither women nor their water pots are granted any quarters here. And that really is the story at the heart of Koozhangal: with potable water turning into a barely visible underground trickle and women being pushed to the fringes, dehumanisation is inevitable.

The film's title is a literal reference to the pebble Velu places in his mouth as he wends his way back to his village through the thirst-inducing heat. This ritual isn't a one-off, a fact that is revealed when he returns home. This pebble is one of many that the boy has collected over a period of time.

Velu's contempt for his father stems from the violence that he and his mother, whose name the boy has etched on a rock face, giving it precedence over the names of his sister Lakshmi, himself and his father (in that order), are constantly subjected to. As they trek back, Ganapathy hurts his toenail, all the more reason for Velu not to venture anywhere near him.

Not that Ganapathy is ever not in a foul mood. When he asks a friend for a loan for the bus tickets and a bottle of hooch, he is unapologetically gruff. On the bus, he picks up a fight with a co-passenger who objects to his lighting a beedi. And in his wife's village, he inevitably has an acrimonious face-off with his brother-in-law. Velu knows all too well what is coming next.

A fuming Ganapathy, having learnt that his wife has gone back home, growls to Velu: from now on you have no mother, only a father. That is a thought that can only make the boy shudder. He responds with an act that serves to buy time for his mother - it compels Ganapathy to walk all the way back to his village.

Walking way behind his father, Velu uses a shard of glass - part of a broken mirror - and reflects the rays of the hot sun into Ganapathy's back. It is an act of provocation couched in a dash of humour, a rare commodity in a region overrun by desolation and drudgery. It is a little boy's way of getting back at the man who has made his life far more miserable than it should have been.

That life could have been infinitely worse for him is driven home by the fate of another family - this one is homeless - that survives on rats. They smoke the rodents out of their holes to skewer and eat them. Koozhangal presents an intense portrait of marginalisation that never loosens its grip on the audience.

Cameramen Vignesh Kumulai and Parthib - barring a few drone shots - stay at ground level, tracking the characters in a way that approximates the effect of walking alongside, or behind them, keeping a close, unfailing eye on their progress. The precise editing by Ganesh Siva (a first-timer like the director and the two cinematographers) buttresses the unremitting rhythm of the film.

Koozhangal comes as close to being a masterpiece as any debut film has done this millennium.

(Koozhangal won the International Film Festival of Rotterdam's top prize, the Tiger Award, early this year and is currently screening in the New Directors New Films programme of New York's Lincoln Center. It is also set to have virtual screenings at the upcoming Indian Film Festival of Los Angeles from May 20 to 27).