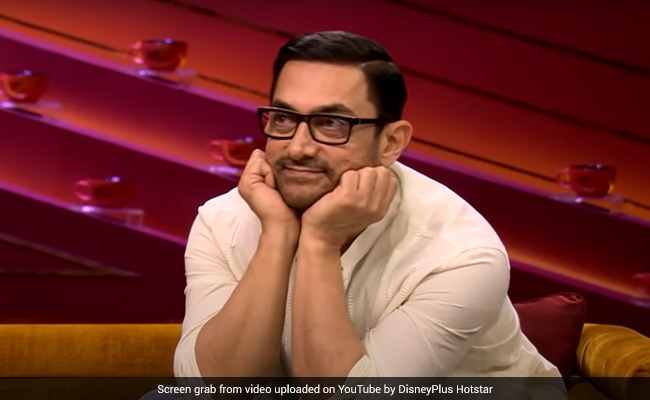 Aamir Khan was at his unfiltered best in the latest episode of Koffee With Karan 7. The actor, who was accompanied by Laal Singh Chaddha co-star Kareena Kapoor, managed to win the Rapid Fire and its obvious why. The actor, during the course of the show, gave us epic one-liners. "Ek sentence me do-do bar insult," for instance. Aamir Khan managed to troll Karan Johar on the show too. "I thought I had one major troll in my life, there is another one who has joined that party," Karan Johar jokingly told Aamir Khan at one point.

The only thing Aamir liked about K3G

Aamir Khan, during the show confessed that K3G and Lust Stories are the only Karan Johar projects that he liked. He added that he loved Kareena's performance as Poo in the film and said that in fact that was the only thing he loved about Kabhi Khushi Kabhie Gham. After Kareena rated Aamir's fashion Poo-style ("Minus and Not applicable"), KJo said, "You won't know this reference." After which Kareena said, "He does, he loved K3G. He loved K3G, he loved me. I remember, Aamir Khan's compliment very clearly." Amir added, "I loved Poo, she's right, I loved her. I loved her and that's the only thing I liked about that film. I'm very sorry."

When asked, "Between the two of you, who is more friendly with the paps," Kareena said, "You are more friendly but they probably like me more." Aamir added, "Everyone likes you more yaar. I also like you more." Kareena then said, "No, like in the sense maybe they like photographing me more. I don't know." To this, Aamir hilariously replied with a tweaked version of Prem (Salman)'s Andaz Apna Apna dialogue "Unka ek ek sawal humare do do jawab" and said, "Dekho, ek sentence mein do do baar insult kardiya (look, she insulted me twice in a sentence). Ek toh of course they like me more. Then of course they like how I look more."

"Your mother doesn't mind you talking ill about other people's sex life?"

When Karan Johar asked Kareena Kapoor "quality sex after babies is a myth or a fact," the actress said, "You wouldn't know." Karan Johar then told Kareena that his mother is watching the show. Just in time, Aamir said, "Your mother doesn't mind you talking ill about other people's sex life?" Mic drop.

Kareena is bad at dressing badly

Kareena Kapoor might not be a fan of Aamir Khan's dress sense but Aamir does think that the actress is "bad at dressing badly." Meanwhile, rating Aamir's fashion sense, Kareena said, "Non-applicable." To this, Aamir Khan replied, "She means there is no fashion sense." The filmmaker then asked Kareena Kapoor to answer again as Poo to which, she said, "Minus."

"So you were being nice to someone? Kya baat karraha hai yaar?"

Karan Johar, speaking of his trolls, said that he was recently accused of being partial towards Janhvi, in the episode where she featured alongside Sara. KJo then asked Aamir if he also thinks that he is partial. In Aamir's words: "All the time. You are quite partial." When Karan Johar also explained that he was feeling bad after Janhvi Kapoor lost both the rounds, Aamir replied, "So you were being nice to someone? Kya baat kar raha hai yaar (What are you even saying)."

Aamir Khan, who has appeared in a coupe of episodes of Koffee With Karan across seasons, joked about how someone always gets hurt during the show. Aamir said, "Maa kasam, aap jab bhi show karte ho, kisi na kisi ka insult hota hi hota hai, koi na koi rota hi rota hai. Kisi na kisi ka dil dukhta hi dukhta hai (I swear on my mother, whenever you do a show, someone or the other gets insulted, cries or their heart breaks)."

"Don't be happy that you have not watched your own movies"

When Karan Johar pointed out that Kareena Kapoor does not care about her film's box office success and failure and that she is "bonafide movie star on your own terms." To this, Aamir said, "Kareena is very concerned about her films. Ever since we spoke, she's been talking to me about how this or that was done. There's not enough publicity. Whenever she meets me, she is shouting at me. She has been scolding me since two months. I swear she scolds me for something or the other." When Kareena revealed that she hasn't watched Laal Singh Chaddha, Aamir said, "Don't be happy that you have not watched your own movies. She's so proud about it. It'll be heartbreaking if she doesn't see the film."

"I'm the perfectionist and she's perfect"

There is a reason Aamir Khan won the Rapid Fire round. The actor managed to give quick answers and was super entertaining throughout the show. Aamir Khan, who is known as Mr Perfectionist, said during the episode, "I'm the perfectionist and she's perfect," referring to Laal Singh Chaddha co-star Kareena Kapoor.