"In terms of training there wasn't much required," said Katrina Kaif 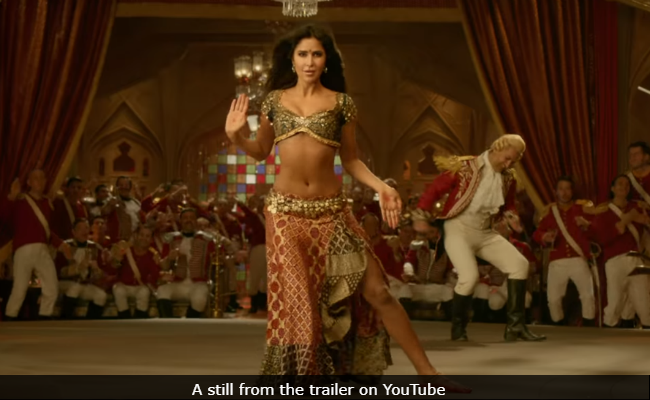 Katrina Kaif in a still from the trailer of Thugs Of Hindostan. (Image courtesy: YouTube )

Katrina Kaif, who will be seen playing the role of a dancer named Suraiyya Jaan in her upcoming film Thugs Of Hindostan, recently interacted with the media at the film's trailer launch and revealed that her character in the film is drastically different from the one that she portrayed in her last film Tiger Zinda Hai, co-starring Salman Khan, reports news agency PTI. During the interview, Katrina said that she might not be seen doing action sequence but her character is replete with all the "other elements" which are required for a film such as Thugs Of Hindostan. "What I am doing in Thugs of Hindostan is completely different from Tiger Zinda Hai, which was an action franchise. In this film, my role is less of an action and more of other elements that are required for a film like this," PTI quoted Katrina as saying. The 35-year-old actress added, "In terms of training there wasn't much required but there have been other things that we have put in for this film."

Speaking of her experience of working with Thugs Of Hindostan director Vijay Krishna Acharya (with whom she has previously worked in Dhoom 3), Katrina said, "Vijay is a phenomenal director. I am blown away by his vision and the spectacle that he tries to create. To be part of this film is a huge honour for me. The kind of entertainment that Vijay and the whole team wants to bring to the audience through this film is great. It will be a special film to remember always."

Take a look at the motion poster here:

Meanwhile, take a look at the Thugs Of Hindostan trailer that released today. The trailer instantly went viral and it has over 5,627,395 views on YouTube as of now.

Apart from Aamir Khan and Katrina Kaif, Thugs Of Hindostan also stars Amitabh Bachchan as a Thug commander of the sea named Khudabaksh, Fatima Sana Shaikh as a warrior Thug named Zafira and John Clive as the Commander of the East India Company.

Thugs Of Hindostan is slated to release on November 8.