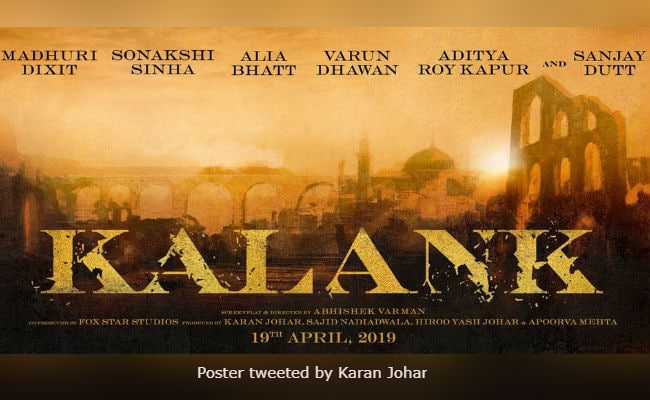 New Delhi: Karan Johar finally revealed the title and cast of the much-talked about film that was to star Sridevi. Titled Kalank, the Dharma Productions' film will be directed by Abhishek Varman and has an impressive cast comprising Madhuri Dixit, Sanjay Dutt, Alia Bhatt, Varun Dhawan, Aditya Roy Kapur and Sonakshi Sinha. Whoa. That's a lot of people but we guess KJo knows it best. Karan tweeted to say that Kalank will be an epic drama and release in April next year. "Proud and excited to announce our epic drama Kalank. Releasing April 19th, 2019. Directed by Abhishek Varman. Starring Madhuri Dixit, Sonakshi Sinha, Alia Bhatt, Varun Dhawan, Aditya Roy Kapur and Sanjay Dutt.

Credits for screenplay also go to Abhishek Varman while Kalank will be co-produced by Fox Star Studios, Sajid Nadiadwala and Apoorva Mehta. Here's some more intel about the film, courtesy Taran Adarsh:

Kalank was to star Sridevi as the protagonist but after her tragic end, Madhuri Dixit was roped in for the role. This is how Sridevi's daughters Janhvi and Khushi had to say: "Abhishek Varman's next film was very close to mom's heart... Dad, Khushi and I are thankful to Madhuri ji for now being a part of this beautiful film," Janhvi had Instagrammed.

Earlier in March, Karan Johar piqued our interest in the project and tweeted clarifications to dismiss certain reports that were doing the rounds on the Internet. "Some clarifications! Yes. We are honoured and humbled to have Madhuri Dixit on board for Abhivarman's next! No the film is not titled Shidtay! Yes the film will commence shoot in mid-April! The film's final cast and credits will be announced soon!"

Some clarifications!!! Yes...we are honoured and humbled to have @MadhuriDixit on board for @abhivarman 's next! NO the film is NOT titled SHIDHAT! Yes the film will Commence shoot in mid April! The films final cast and credits will be announced soon!

Promoted
Listen to the latest songs, only on JioSaavn.com
Going by Karan Johar's tweet, Kalank must have gone on floors already. How excited are you about the new film? Tell us in the comments below.

Kalank is slated to release on April 19 next year.