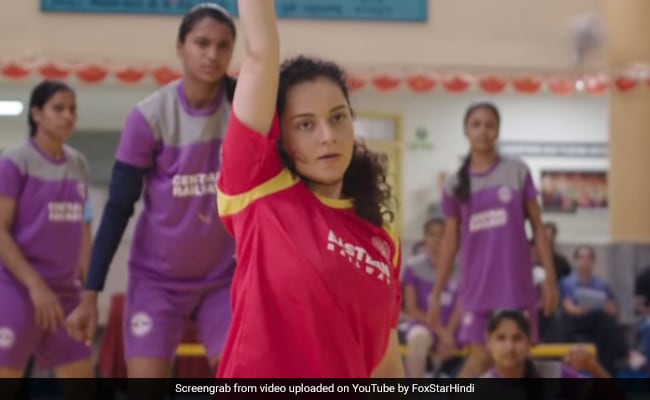 Kangana Ranaut in a still from Panga trailer (courtesy YouTube)

Kangana Ranaut stars as Jaya - a mother, a wife and a forgotten Kabaddi champions - in the trailer of Panga, which was released on Monday afternoon. The three-minute-long trailer of the sports drama begins with Kangana being introduced as a working woman, who spends her day shuttling between daily chores and working in a railway office. Kangana's loving husband Prashant is played by Jassi Gill, who snores big-time in the bedroom, literally gets kicked by Jaya (she retained some of her Kabaddi skills) and has to resort to a hot-water bag in the mornings. Child artiste Yagya Bhasin is adorable as Jaya and Prashant's son Adi, who observes everything and has an opinion about everything, even about her mother's comeback as a Kabaddi player after several years.

Jaya, who enjoyed the reputation of being a Kabaddi champion once, bumps across a team of Kabaddi players at a railway station but they fail to recognise her as a former champion. This prompts her to re-think about making a comeback in the field of Kabaddi. With help from her supportive husband Prashant, who encourages her to train and manages the household, Jaya struggles to make it to Team India. Neena Gupta plays Jaya's nagging mother, who gets teary-eyed with her daughter's success.

Over the weekend, director Ashwiny Iyer Tiwari introduced the characters of Panga through new posters, writing: "Jo sapne dekhte hain woh panga lete hain. Inki family ki kahani hum sab se judi hai (Those who dare to dream, dare to take challenged. The story of this family is connected to each one of us)."

Directed by Ashwiny Iyer Tiwari, Panga is all set to hit screens on January 24, 2020.