Intrusion Review: Freida Pinto uses restrained means to convey despair and determination. Much of what swirls around her is so predictable and laboured that she does not have a chance to deflect Intrusion from its dogged pursuit of mediocrity. 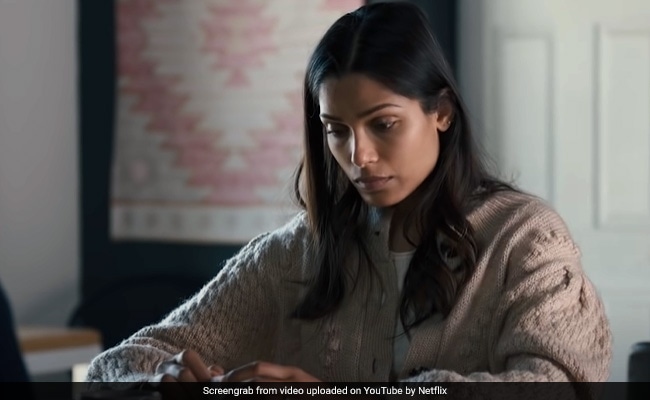 Intrusion Review - A still from the film. (Image courtesy: YouTube)

What would you do if you were to see a baseball bat within the reach of an exceedingly violent individual looking to use it as a weapon? If you have your wits about you, you'd try to make sure the club doesn't fall into the wrong hands. In Intrusion, a Netflix thriller trapped in tepid cliches, the character who you silently egg on to display presence of mind and alacrity in the baseball bat situation possesses neither.

Intrusion revolves around a spanking new house in rural New Mexico that a couple move into from Boston. The building stands on a secluded plot. Its owners have no neighbours - a situation ripe for a home invasion and a chain of nightmarish events.

As you watch the film scripted by Christopher Sparling (the writer of the infinitely sharper Lakewood, a TIFF 2021 title starring Naomi Watts) and directed by Adam Salky, there are times you want to jump into the film (out of irritation not excitement mind you) and nudge the two key characters to stop acting clueless.

Before half the film has unfolded, it becomes clear which way the story is headed. The audience knows what is in store in the last quarter of Intrusion, but Mrs and Mr Parsons, Meera and Henry, do not have the foggiest idea. Two break-ins in quick succession rattle them, especially the woman, who is coming off a mentally scarring medical emergency.

The Parsons, married for 12 years, are as happy as a couple can be. They have just moved into their dream abode in rural New Mexico, where the India-born Meera (Freida Pinto), a breast cancer survivor and a therapist who cannot have a baby and is vulnerable to mood swings. There is worse ahead.

But Henry (Logan Marshall-Green), an architect, is a husband to die for. He has meticulously designed and built the house for his wife and showers on her all the care and affection he can muster. He is finicky to a fault when it comes to protecting her. But is he actually shielding her from harm or seeking to keep her from stumbling upon uncomfortable truths about himself and the house he has constructed?

In one scene, Henry is visibly upset that Meera has got a test done without taking him into confidence. We are not that couple, we do not keep secrets from each other, the man says. His assertion presages just the opposite: in keeping with the norms of the genre, many a secret is going to tumble out of the nooks and crannies of the imposing, cold, impersonal home.

Henry and Meera return one night from a dinner outing to find their sprawling concrete-and-glass home ransacked and two mobile phones and a laptop stolen. A detective from the Corrales police department arrives the next morning to look into the matter. Even as investigations are on, another break-in takes place, this time when Meera and Henry are sleeping.

The latter confronts the three masked intruders and the incident ends with Henry using his gun. Another secret out of the bag! Unaware of the presence of a gun in the house, an offended Meera gives Henry a piece of her mind.

Meera has the upper hand in most exchanges, be they over Scrabble (she disavows Henry of his mistaken belief that 'gestalt' is a proper noun and not a word that means something) or the pronunciation of hors d'oeuvre. If that is meant to show us how geeky Meera is, it fails to give her any ammunition at all when things begin to spin out of control.

Henry's suspicious ways compel Meera to take to impromptu sleuthing. But she is as sloppy as her husband as she goes about trying to figure out what is going on in and around her house. As the plot thickens, neither the man nor the woman shows any special signs of astuteness. A tracking app on their phones enables Henry and Meera to keep tabs on each other but the moves they make smacks of impulsiveness.

Woven into the thriller is a missing 18-year-old girl (Megan Elisabeth Kelly) and a family of workers who have a direct link with the invasion of Meera's home and events leading up to it and stemming from it. The only thing you eventually really want to know is what happened to the teenager, but the climax, which one can see coming from miles away, is a massive damper. It is derivative, contrived and devoid of logic.

Logan Marshall-Green, in the guise of a seemingly caring man whose secrets are hidden in plain sight, suffers the fate of an actor saddled with a script that gives him an onerous job to do without the means needed to pull it off forcefully enough.

Freida Pinto is the saving grace. Contrary to the film's general tendency to bank on hackneyed lighting, cuts and music to suggest dread or impending danger, she uses refreshingly restrained means to convey Meera's despair and determination. Much of what swirls around her is so terribly predictable and laboured that she does not have a chance in hell to deflect Intrusion from its dogged pursuit of mediocrity.

Hers is a difficult role because the woman she plays exists in a near vacuum. Apart from her husband and a colleague or two at her workplace, there is nobody around her to lend her the emotional charge required to flesh out details about the woman that she is, the tough past she has endured, her cloyingly cushioned existence within the stuffy marriage, and her growing worries that something is seriously amiss between her and her husband are barely delineated.

Pinto succeeds in getting us to root for her character, no matter how half-baked it is. That brings us back to the detrimental and neglected presence of the baseball bat and the real threat it represents as the female protagonist fights to save herself in a house that conceals dreadfully dark spaces.

As for the film itself, it has little space for genuine surprises and scares. Intrusion starts on the wrong foot and never gets off it notwithstanding Freida Pinto's best efforts.