Here's how Amitabh Bachchan added one more memory to the family album. 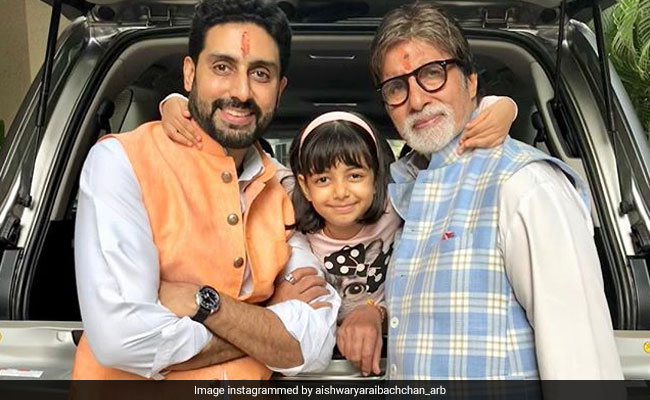 It's safe to call megastar Amitabh Bachchan a huge fan of throwback pictures, because who doesn't like to browse through the pages of memory? The 76-year-old actor delighted us with a throwback-special collage, featuring three sets of blasts from the past memories. Adding a rather poetic caption in hindi, which reads: "Pidhi dar pidhi, jivni ki pidhi." The photo is extra special because it features four generations of the Bachchans - a baby version of Amitabh Bachchan stars with his father Harivansh Rai Bachchan, next in the line-up is Amitabh Bachchan with Abhishek and then an adorable click of Abhishek with his daughter Aaradhya from when she was much younger wraps the photo.

A detailed tour of Amitabh Bachchan's social media pages will reveal that the actor loves to juxtapose photos of generations old and new for a post every now and then. Last year, Mr Bachchan tweeted a collage of three 'turbanators' of the Bachchan family - his grandfather Khazan Singh Suri, himself and son Abhishek in his Manmarziyaan avatar. "Generations... my nana Khazan Singh Suri; me in film Ab Tumhare Hawale Watan Saathiyo; and Abhishek in film Manmarziyaan," Big B captioned the post.

T 2750 - GENERATIONS .. my Nana Khazan Singh Suri ; me in film ATHWS ; and Abhishek in film #Manmarziyaanpic.twitter.com/YBU2jT1yCd

A few years back, Abhishek posted a photo within a photo progression post, signature of TV show Modern Family and captioned it: "4th generation." This one too featured four generations of Bachchans from Khazan Singh Suri to Aaradhya.

On the work front, Amitabh Bachchan was last seen in Badla. His upcoming films include Brahmastra and Sye Raa Narasimha Reddy.