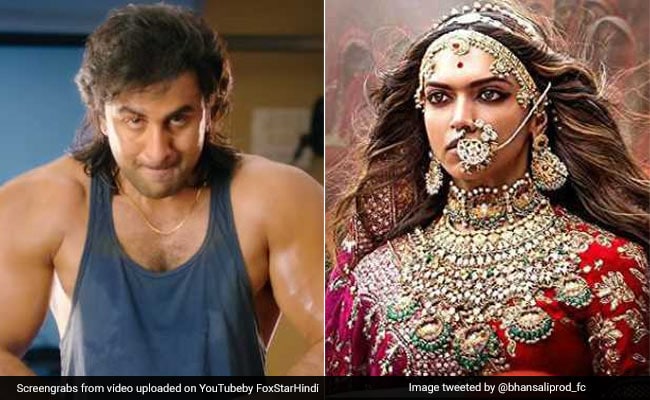 A still from Sanju and "Padmaavat

Deepika Padukone's "Padmaavat" and Ranbir Kapoor's Sanju are leading the nominations list for the Indian Film Festival of Melbourne (IFFM) Awards 2018, which is to be held from August 10 to 22, news agency IANS reported. The IFFM Awards is termed as southern hemisphere's greatest annual celebration of Indian cinema. For the Best Film category, "Padmaavat" and Sanju will compete with PadMan, Hichki, Raazi and Secret Superstar. Telugu films Mahanati, a biopic on actress Savitri and Rangasthalam are also part of the Best Film nominations list.

"Padmaavat" and Sanju are two of the highest-grossing films of 2018. Sanju, which is still running successfully at the box office, is a biopic on actor Sanjay Dutt. It is nearing the 300 crore-mark. In the raj-directed Sanju, Ranbir Kapoor starred as Sanjay Dutt.

Meanwhile, "Padmaavat," which also starred Ranveer Singh and Shahid Kapoor, made over Rs 300 crore at the box office. After stiff opposition from fringe Rajput outfits and political parties over the content of the film, Sanjay Leela Bhansali's "Padmaavat" hit the screens earlier this year.

"Our competition section is as diverse as the films and people who come for the festival. It has some mainstream, indie and regional films but the one thing they share no matter what the language or theme, it is fantastic eye-catching cinema," IFFM Director Mitu Bhowmick Lange said in a statement, IANS reports.

At the IFFM, the winners will be chose from six categories. Here's the list of complete nominations:

Up, Down and Sideways (Documentary)

Ranvir Shorey- In The Shadows

Dipesh Jain- In the Shadows