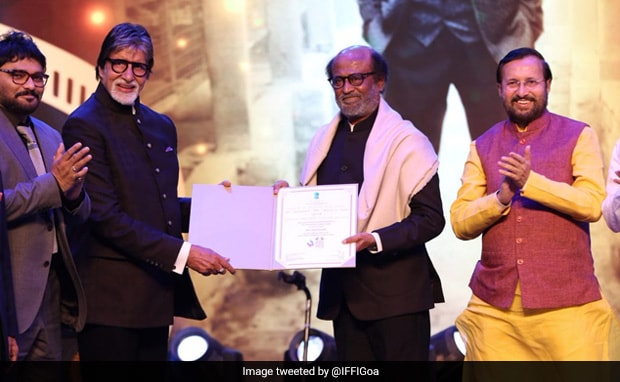 Amitabh Bachchan and Rajinikanth inaugurated the 50th edition of International Film Festival Of India (IFFI) on November 20 in Goa. Rajinikanth was honoured with the Icon of Golden Jubilee Award for his contribution to arts and cinema. He also felicitated Amitabh Bachchan at the inaugural ceremony, hosted by filmmaker Karan Johar. French actress Isabelle Huppert received the Lifetime Achievement award at the ceremony. The film festival's opening ceremony, held at Shyama Prasad Stadium, was also attended by Union Minister for Information and Broadcasting Prakash Javadekar, Secretary for Information and Broadcasting Amit Khare and Goa Chief Minister Pramod Sawant.

Check out the pictures of Rajinikanth and Amitabh Bachchan from the film fest:

One of the most acclaimed and influential actors in India, Shri @rajinikanth was honoured with a special award "Icon of the Golden Jubilee of IFFI"#IFFI2019@satija_amit@MIB_India@PIB_India@esg_goapic.twitter.com/u2aa1uFKhT

Shri. @rajinikanth dedicates the "Icon of Golden Jubilee of IFFI" award to all the directors, producers & crew he has had the pleasure of working throughout his illustrious career. #IFFI50#IFFI2019pic.twitter.com/Q48flMqayn

Shankar Mahadevan also performed with 'The Godfather Of Indian Jazz' Louis Banks at the ceremony. Take a look:

#IFFI50 LIVE
The amazing @Shankar_Live along with 'The Godfather Of Indian Jazz' Louis Banks, deliver a staggering performance at the #IFFI2019 Inaugural Ceremony. pic.twitter.com/ElpY8j3F95

The film festival will be held from November 20-28 in Goa. Around 250 films from over 75 countries are expected to be screened during the film festival. On the theme 'The Joy of Cinema,' total 14 movies will be screened at two venues - Jogger's Park, Altinho and Miramar beach - from November 21 to 27. The Open Air Screenings will be open to everyone and will not require any registration. Some of the movies to be screened at Jogger's Park are Chalti Ka Naam Gaadi, Hera Pheri, Chennai Express, Badhaai Ho and Total Dhamaal.

IFFI is jointly organised by the Directorate of Film Festivals of the Union Ministry of Information and Broadcasting and the Goa government's Entertainment Society of Goa. Read more about IFFI 2019 here.