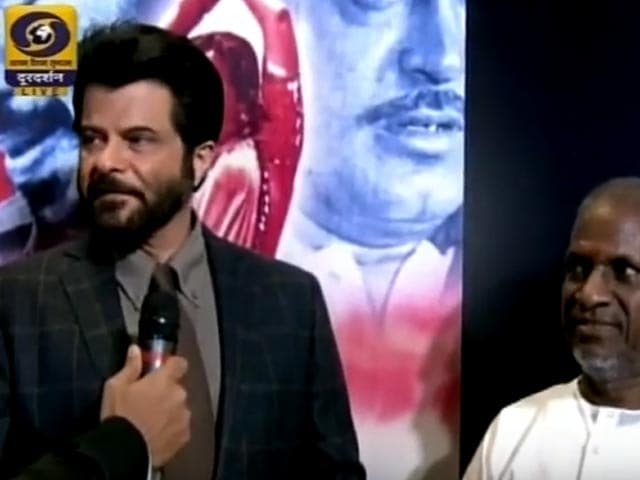 This image was tweeted by @MIB_India

New Delhi: The International Film Festival of India 2015, held in Goa on November 20, got off to a spectacular start with a grand opening ceremony. The highlight of the evening was music maestro Ilayaraja receiving the Centenary Award from actor Anil Kapoor, the chief guest at the fest this year. Russian filmmaker Nikita Mikhalkov was honoured with the Lifetime Achievement award. (Also Read: IIFI 2015: Film Line-Up Includes Oscars Foreign Film Hopefuls)

Anil Kapoor, who beckoned the audience to 'get lost in the magic of cinema', set the stage on fire as he danced to the 1989 chartbusting number My Name is Lakhan and to Welcome, the popular title track from the 2007 laugh riot. He also gave a shoutout to his Slumdog Millionaire co-star Dev Patel, who was seated in the audience.

The festival opened with Matthew Brown's biopic of Indian mathematician Srinivasa Ramanujan The Man Who Knew Infinity, starring Dev Patel and Jeremy Irons. The film, based on the true story of friendship between Ramanujan and Professor GH Hardy.

Dev Patel had earlier told NDTV, "Playing an intellectual is tough. Asked about his relationship with his co-star Jeremy, Dev had said, "Jeremy is so incredible. He was a mentor on sets and off sets. That made it very easy because I have to look up to him on the screens and it made it it easy because he is so technically sound as well. It's been a big learning curve for me."

On the wave of censorship, he said, "It's a delicate thing, censoring art doesn't quite work for me sometimes. You have got to be very careful. If you deny people something, it becomes more of an obsession."

News agency IANS reported that a couple of FTII students staged a minor protest during the ceremony, before being escorted out of the venue.

The festival will come to a close on November 30. Music maestro AR Rahman will be the chief guest at the closing ceremony.