Hustlers Movie Review: As the drama kicks in, Constance Wu come into her own and matches Jennifer Lopez, move for move. 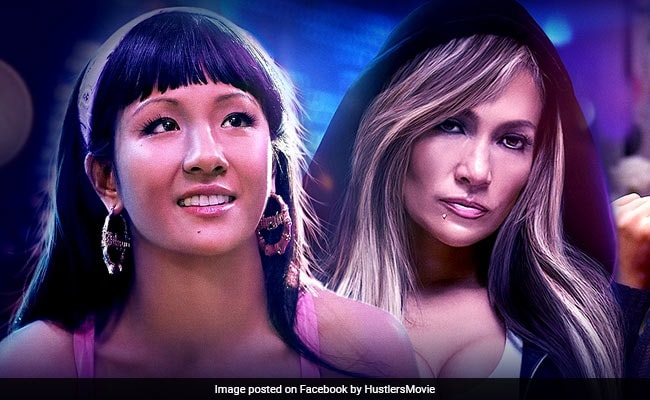 Female power of a raw, unapologetic and take-no-prisoners variety is in full play in Hustlers, writer-director Lorene Scafaria's immersive take on true events chronicled in a 2015 New York Magazine article. A group of Manhattan strip-club dancers pull out the stops in settling scores with their Wall Street clients after the 2008 financial meltdown leaves the girls staring down the barrel of uncertainty and despair. The men ripped off the whole world and got away with it. Now, it is their turn to be at the receiving end.

Hustlers is a wild and wacky crime caper that pulls no punches. But more than that it is a giddying gender dynamics-flipping tale that goes right to the heart of ensconced power equations that rest squarely on the privileges and entitlements that money can buy. Money is precisely what the women in Hustlers want no matter what it takes.

Exploitation is at the core of the dancers' relationship with the wealthy sleazeballs who turn up at the strip club every night and blow up their expense accounts in the smoky champagne rooms. But the women who serve them are acutely aware of the control that they can exercise over the myopic, sozzled men if they decide to put their heads and hearts to it.

The women go all out to make their point. So do the actors who play the parts, nobody more emphatically than Jennifer Lopez. Constance Wu gets top billing, but Lopez is the one who steals the show as a savvy stripper who knows precisely which side of the bread is buttered and does not scrimp on passing on the knowledge to her 'gang' members.

Lopez is a consummate performer - her seductive act on the pole early in the film is an absolute turn-on. The Hustlers role is right up her street and she does not put a foot wrong. Wu is less certain to begin with. The tentativeness probably has something to do with her limited dancing skills. As the film progresses and the drama kicks in, she come into her own and matches Lopez, move for move.

At the very outset, Destiny (Wu), through whose eyes we see the story unfold framed in the device of an interview to a reporter (Julia Stiles), states unequivocally: "This is a story about control." How the levers move from the hands of the men into the grasp of the feisty girls and what that transition implies are the two focal points around which Hustlers revolves. At one end of the spectrum, it is a story of corruption, greed and manipulation. At the other, it showcases the forging of a remarkable sorority that pays the men back in their own coin.

The girls' actions - they spike their clients' drinks with a cocktail of Ketamine and MDMA, run them to the ground, and then max out their corporate cards - smack of criminality. Hustlers does not shy away from recognizing that a line is being repeatedly crossed, but the film is never explicitly judgmental. In the light of the ignominies that the girls have faced on account of the wanton profligacies of the CEOs, CFOs, investment bankers, hedge fund managers and corporate raiders who are among their clients, it seems only fair that the exploiters are made to pay for their sins.

"The whole city, this whole country is a strip club. You have people tossing the money and people doing the dance," says Ramona. It is easy to understand why she thinks nothing of pulling a fast one on people who have taken the world for a ride and gone unpunished. It is justified comeuppance.

But that is the outer shell of Hustlers. Dovetailed into its innards is a warm tale of friendship between two women who seem to have nothing in common when they first meet. A new recruit at the strip club, Destiny is clueless. She finds the perfect mentor in Ramona to guide her through the maze that lies ahead. But Destiny is a fast learner and picks up the ropes quickly enough.

One thing Destiny learns days into the job is that this is a cutthroat world where there are no free lunches. A lap dance instructor (played by Cardi B) pulls Destiny by the hair when the newcomer makes the mistake of approaching one of the former's own patrons. On the rooftop of the strip club a while later, it is quite another story as Ramona takes Destiny under her wing. "Climb into my fur," she says to the newbie. Destiny does. And she is there to stay until the pressures of motherhood, a bad relationship and the fear of the law begin to get to her.

The skin-show in Hustlers - there is inevitably plenty of it - is dressed in a matter-of-fact, all-in-a-day's-work kind of cloak. It is stripped bare of the purpose of titillation, which tends to be the norm when the act of seduction is viewed through the male gaze. There is no room here for any such distortion.

The blend of realism and theatrics in Hustlers pulsates with life. It yields a witty and no-holds-barred examination of frailty and simplicity on one hand and strength and guile on the other. The film's in-your-face physicality is leavened with generous dashes of humour.

Hustlers is embellished with a lively, foot-tapping soundtrack that features the likes of Britney Spears, Rihanna, Janet Jackson, Sean Kingston, Fiona Apple and Usher (who puts in an appearance designed to bring the house down) alongside a bunch of Chopin etudes. The restless camera is always on the move, imparting to the film a staccato, montage-like feel that serves to enhance the energy inherent in Scafaria's treatment of the narrative. Highly recommended.