The film shows Diljit as a single father, whose life takes a U-turn when his ex Shehnaaz returns 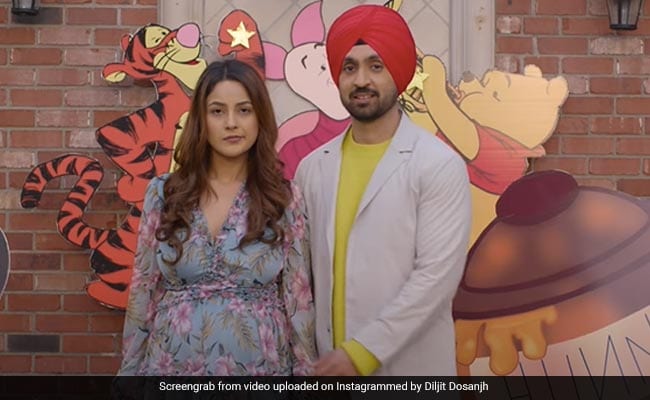 Honsla Rakh Trailer: Diljit and Shehnaaz in a still from the film. (Image courtesy: YouTube)

The much-awaited trailer of Diljit Dosanjh, Shehnaaz Gill and Sonam Bajwa's romantic-comedy Honsla Rakh dropped on the Internet on Monday and it is a laugh riot. As the title of the film suggests, Diljit Dosanjh has to stay patient and manage his new married life with Sonam Bajwa when his ex Shehnaaz Gill, with whom he has a 7-year-old son, enters his life again. The trailer starts with Diljit Dosanjh and Shehnaaz's date night and quickly shows the two expecting a child together, with which Shehnaaz is not at all happy. They consult a lawyer and she insists that the custody of the child should go with Diljit as she doesn't want the baby but he denies it. However, after divorce, he gets child custody.

The trailer then shows how Diljit Dosanjh learns to take care of his baby all by himself. Cut to his present life. He is happy with his son and even found a new love interest - Sonam Bajwa. Just when the duo decide to get married, Shehnaaz Gill enters their lives, leaving Diljit confused and impatient.

The film revolves around the "emotional bond between a father and a child and love between men and women in modern times."

Sharing the trailer on social media, Diljit Dosanjh wrote: "What happens when a loveable, rooted, desi, Punjabi young man, who's a single father with a seven-year-old boy attempts to find love again, find a mom for his son, crosses paths with his ex who comes back into the city after a seven-year gap? Honsla Rakh, starring Diljit Dosanjh, Sonam Bajwa, Shehnaaz Gill and Shinda Grewal is a romantic comedy set in Vancouver, Canada that has warmth at its centre and deals with the emotional bonds between father and child, and love between men and women in modern times."

Honsla Rakh is directed by Amarjit Singh Saroon and co-produced by Daljit Thind and Diljit Dosanjh. The film marks Shehnaaz Gill's first project after the death of her rumoured boyfriend, actor Sidharth Shukla, who died on September 2.

Honsla Rakh will open in theatres on October 15 this year.