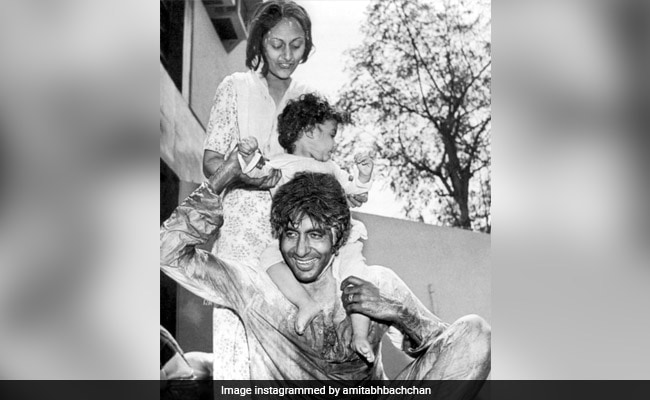 Amitabh Bachchan has taken us back to the past when he celebrated Holi with his wife Jaya Bachchan and son Abhishek Bachchan. Big B's Holi-special post on Instagram is all about it. Amitabh Bachchan shared an old monochromatic picture on the occasion which features his wife Jaya, his son Abhishek and himself. In the photo, young Amitabh Bachchan is in a festive mood as he flashes a million-dollar smile. The reason for Big B's smile is little Abhishek who is resting on his shoulders. Abhishek as a baby is looking the other way. His mom Jaya, who is standing at the back, is holding him from behind.

Big B wore a kurta for the occasion. He is covered in gulaal. Little Abhishek is sporting a kurta pyjama. Jaya can be seen in a printed ethnic suit.

Rang Barse was picturised on Amitabh Bachchan, Jaya Bachchan, Rekha and Sanjeev Kumar in the 1981 movie. Even after decades, Rang Barse remains one of the favourite tracks being played during Holi in India.The track was sung by Amitabh Bachchan. His father and poet Harivansh Rai Bachchan wrote the lyrics of the song.

Coming back to Big B's latest post, it is surely giving us major Silsila vibes. Time to play the song Rang Barse may be?

In terms of work, Amitabh Bachchan is gearing up for the release of his upcoming film Chehre. He also has films Brahmastra, Jhund and Mayday coming up. On the other hand, Abhishek Bachchan will next be seen in the upcoming movie The Big Bull.