Here's How Diana Penty Described Her 2020 "In A Nutshell"

In the photo, which aptly represents Diana's 2020, she's comfortably tucked in bed and appears to be fast asleep. 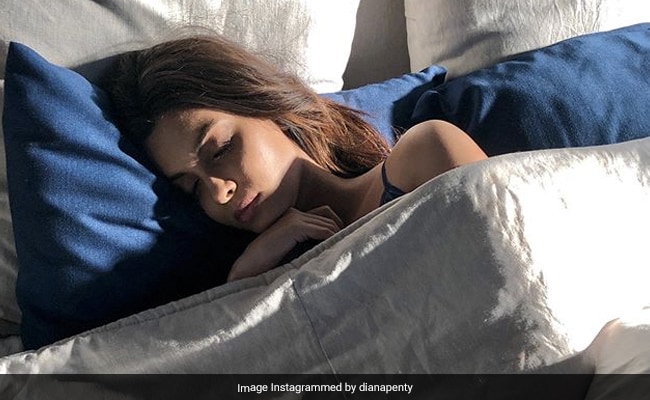 Actress Diana Penty summed up how the year 2020 has been for her just perfectly in an Instagram post. "2020 in a nutshell," Diana captioned her post, which was accompanied by a photo of her napping. In the photo, which aptly represents Diana's 2020, she's comfortably tucked in bed and appears to be fast asleep. A nationwide lockdown was imposed in mid-March to curb the spread of COVID-19 pandemic, when productions and film shoots were shut. Lockdown restrictions are gradually being eased in India, with shoots resuming with strict precautionary measures. Diana Penty was last seen in 2018 release Happy Phirr Bhag Jayegi.

Diana Penty's Instagram is a mix of her quarantine diaries with her favourite partner-in-crime and nap buddy - her pet dog Victoria and throwback memories from her childhood album.

On Father's Day, we got a glimpse of little Diana in this cool and quirky post for her dad: "Ro, wherever in the galaxy you are. Remember to shine brightest bright, so I can spot you all the way from here. PS Photobombed as always by Mother Hen."

#HappyFathersDay Ro, wherever in the galaxy you are. Remember to shine brightest bright, so I can spot you all the way from here P.S. Photobombed as always by Mother Hen 🤦‍♀️😄

Diana Penty has also been associated with initiatives to help Mumbai Police stay safe during the outbreak of coronavirus.

As some of you might already know, #TheKhakiProject has been actively distributing safety essentials to our @mumbaipolice over the last week. So far, we've covered approximately 2000 police personnel across Mumbai (10 police stations) and provided each officer with a pair of safety glasses and half a litre (100ml x 5 bottles) of hand sanitiser to last them approximately a month. But there is so much more we would like to do! With your help, we can extend this to many more police personnel and stations across Mumbai. In order to achieve our goal, we've set up a fundraiser on @kettoindia and would be happy if you could support this cause and spread the word Please see link in bio. @salaambbayorg

Diana Penty made her Bollywood debut in 2012 with Cocktail, in which she co-starred with Deepika Padukone and Saif Ali Khan. Diana Penty is best known for featuring in movies such as Happy Bhag Jayegi, its sequel Happy Phirr Bhag Jayegi, Lucknow Central and Parmanu: The Story Of Pokhran. Diana Penty will next be seen in Shiddat: Journey Beyond Love. Diana Penty her debut at the Cannes Film Festival last year.