Grahan Review: Cautionary Tale Is Recommended For Its Humanist Core

Grahan Review: Pavan Raj Malhotra delivers a perfectly modulated performance. Zoya Hussain as a police officer all too aware of the cost of the truth etches out a convincing portrait. 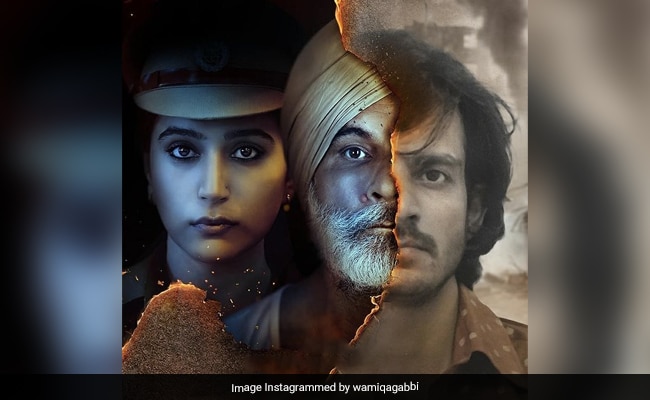 Grahan Review: A promotional poster of the series. (courtesy anshumaan_pushkar )

Hindi-language web shows have often addressed weighty socio-political themes in an entertaining way and ended up touching raw nerves in the process. Grahan, a Hotstar Specials series, courts similar danger. It is the first series to deal with the 1984 anti-Sikh riots. Given the horrific nature of the violence that was perpetrated and the scars it left, easy-on-the-eye-and-mind entertainment is the last thing this show is out to serve up.

Grahan sustains a solemn tone all through its eight episodes. The past weighs heavy on the present and love and hate jostle for primacy here. The riots serve as the backdrop to a small-town love story that spans across three decades. It highlights the immediate and long-term repercussions of a night of madness on a young couple.

While the show cannot be faulted for intent, it comes up short on the impact quotient for all the hard work that is visible in its cautiously crafted frames. Adapted from Bokaro native Satya Vyas' 2018 Hindi novel Chaurasi, Grahan also pulls into its sweep caste oppression and Hindu-Muslim strife, which heightens the contemporary resonance of the series.

A long-overdue police probe and how it plays out for a woman in uniform and her ageing father run parallel to cataclysmic events that shook the nation 30 years ago. The larger context of the 1984 riots is frequently underscored, but the show is essentially focused on a handful of Bokaro residents whose lives are changed forever by the violence.

Grahan centres on the nexus between politics and law enforcement, which, in turn, has a major bearing on the two principal characters - Gursevak Singh (Pavan Raj Malhotra) and his IPS officer-daughter Amrita Singh (Zoya Hussain).

Grahan is, of course, more about how humanity and love fall prey to communal hatred and political opportunism when ambitious and manipulative men lead their flock astray in their greed for power. Ordinary people pay the price.

Created by Shailendra Kumar Jha and directed by Mukkabaaz co-writer Ranjan Chandel, the show is propelled by strong, steady performances by the two main actors and a consistently effective supporting cast. The series, however, is undermined somewhat by an uneven narrative flow. Parts of it work fine, others play out rather listlessly.

The examination of political chicanery at election time and of the motivations that drive the actions of the police top brass skims the surface and offers no fresh insights. The father-daughter drama, a key part of Grahan, is, however, treated with the gravitas it deserves.

The lead-up and immediate aftermath of the assassination of Indira Gandhi on October 31, 1984 in Bokaro - the love story is dovetailed into this strand of the show - constitutes one of the show's two main strands. The other centres on the police team in Ranchi delving into the violence 30 years later with the purpose of delivering justice to the survivors.

A pair of mid-1980s lovebirds are sucked into a political whirlpool and pulled apart. It is here that the series falters a touch. It takes recourse to predictable tropes of the young love genre, which include situations tailormade for the boy to show himself in the best light to the girl he is in love with.

A little more imagination would have lent greater urgency to the blossoming bonding between Sikh girl Manu Chhabra (Wamiqa Gabbi) and Hindu boy Rishi Ranjan (Anshuman Pushkar) even as reports of militant strikes in Punjab filter into Bokaro and give certain sections of the city a pretext for fanning hatred.

Decades later, Amrita Singh, Ranchi City superintendent of police, is put in charge of a special investigation team (SIT) tasked with identifying the men who instigated the mobs in Bokaro on that fateful night. Cynicism has set in both among the law enforcers and the still-traumatised survivors because several similar official inquiries have inevitably proved infructuous.

Amrita's deputy, Vikas Mandal (Sahidur Rahaman) - he provides the story its caste discrimination subtext - convinces her to give the latest probe her best shot. She stumbles upon a secret that threatens to not only sour her relationship with her doting father Gursevak Singh but also jeopardise her fledgeling career. "I want to know the truth," the policewoman says.

That is obviously easier said than done. She has to dig into her dad's past (all she has are some photos from the family album and tenuous leads that emerge as she goes about her job) in order to understand her present. The personal and the public, the psychological and the political intermingle as Amrita is torn between duty and emotion.

Matters are aggravated because her effort receives little active support - but loads of lip service - from her superior, Deputy Inspector-General of Police Ram Avtar Keshri (Sudhanva Deshpande). The senior officer is more intent on serving his political masters than the cause of justice.

Grahan tries its best to make the most of the multiple layers of the plot. However, sustained solemnity isn't enough to keep ennui at bay. Scripted by Anu Singh Chaudhary, Navjot Gulati, Vibha Singh, Prateek Payodhi, besides the show's creator and the director, the show has both emotional traction and political relevance. But for much of the way, the payoff is anything but adequate.

A bitter political tussle between the state chief minister Kedar Bhagat (Satyakaam Anand) and an ambitious Opposition legislator Sanjay "Chunnu" Singh (Teekam Joshi) - both have back stories that explain why they are the way they are - constitutes an important thread. They have a stake in the riots probe and do everything in their power to pressure the police to either take it easy or hasten the proceedings, depending on what suits them.

The show seems to spread itself too thin at times. It evokes the frenzy of those dark days, taps the tenderness of youthful love - the daughter of a Sikh businessman from Moga who has made Bokaro his home and a steel factory worker fall for each other even as the harmony between their communities is under increasing stress - and underlines the wages of the methods that cops have to employ to make progress in a hostile atmosphere. All of this is absolutely relevant no doubt, but the detailing is not always as fine as it should have been.

Pavan Raj Malhotra delivers a perfectly modulated performance that conveys the burden of guilt and remorse that the man has had to carry for a better part of his life. Zoya Hussain, in the role of a police officer all too aware of the pitfalls of the job and the cost of the truth, etches out a convincing portrait.