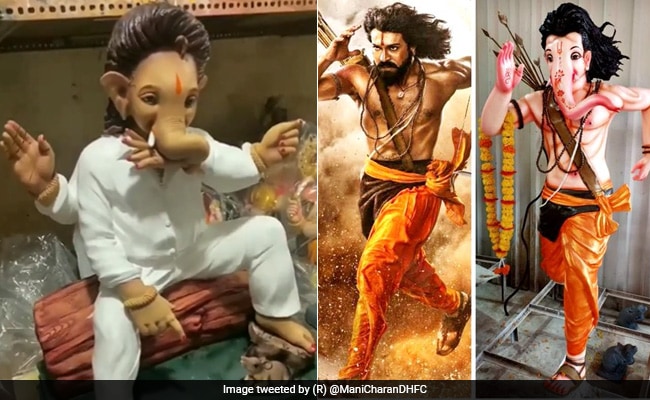 Ganesh Chaturthi is here, and people are busy preparing for the festivities. Amid this, Allu Arjun's Pushpa Raj (Pushpa: The Rise) and Ram Charan's Alluri Sitarama Raju (RRR)'s inspired Lord Ganesh idols have appeared in the market. A fan club on Twitter shared a video of Lord Ganesha in a white kurta-pyjama similar to how Allu Arjun wore in the film. Also, in the video, we can see Pushpa's signature hand gesture. Allu Arjun's Pushpa was well received by the audience and critics.

Speaking of Ram Charan's RRR inspired Lord Ganesha idol, a fan club shared a picture of Lord Ganesha in a bow-wielding look. Helmed by SS Rajamouli, RRR was also well received by the audience and critics. Ganesh Chaturthi is a popular festival, mainly celebrated in Maharashtra.

The Famous #Ganapati Festival Has Arrived. The Fever Of #PushpaRaj Style Was Seen Taking Over Ganpati Idols. 🤩#GaneshChaturthi#AlluArjun#Pushpa#PushpaTheRise#PushpaTheRulepic.twitter.com/PnWLuMJaY6

However, there were some people who didn't like Allu Arjun's Pusparaj inspired idol. On Twitter, a user wrote, "Pushpa Raj was a hardcore smuggler in the movie, what message are these people trying to convey through this #PushpaRaj inspired Lord Ganesha idols #GaneshaChaturthi". Check out the post below:

Pushpa Raj was a hardcore smuggler in the movie, what message are this people trying to convey through this #PushpaRaj inspired Lord Ganesha idols #GaneshaChaturthipic.twitter.com/evFvaUZ2xn

Pushpa: The Rise is a hit Telugu film directed by Sukumar. The movie, released in December 2021, also featured Rashmika Mandanna and Fahadh Faasil in lead roles. Also, the Pusha team has started shooting for the sequel.

On the other hand, RRR, helmed by SS Rajamouli, which was released this year, was well received by the audience. The movie also featured Jr NTR, Alia Bhatt and Ajay Devgn.