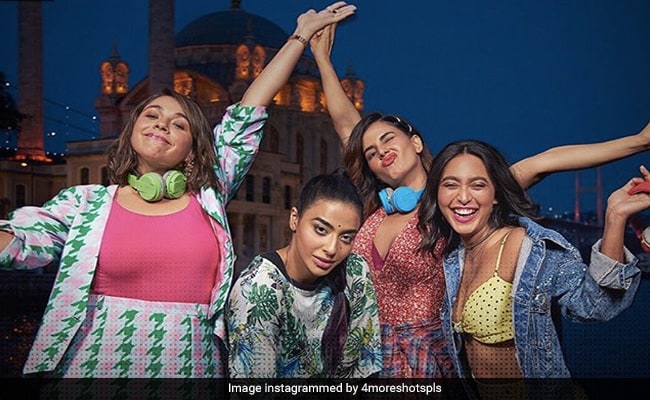 Their friendship ran aground in Season 1. Back in the groove, the Four More Shots Please! girls hit the ground running, turning yet again into the wind beneath each other's wings. Even as they exult in ties renewed, they encounter personal and professional upheavals. It is easy to warm up to the Feisty Four who keep their chins up through it all.

The line between the frothy and the flimsy is precariously tricky and thin in Season 2 of Four Shots More Please!. Consistently smart writing and irresistibly peppy performances ensure it isn't breached. The show, dipped in sassy irreverence, is equal parts head and heart.

The protagonists sound off on much more than just chins, heads and hearts. Amid their robust celebration of female camaraderie, they hold forth, without inhibition, other parts of the human anatomy and bodily fluids, and from thence branch out into an exploration of deeper ideas - gender dynamics, stress-induced hormonal imbalance, anti-natalism, polyamory, open marriages and much else.

In the context of one of them finding herself in the line of vicious right-wing fire, freedom of expression and the right to dissent in the current political climate are also touched upon. That clearly isn't usual for a relationship drama with pronounced rom-com riffs.

Too much to digest? No, that isn't the impression one comes away with. Never claiming to be the last word on the progressive principles it espouses, the script adopts a refreshingly light, unpretentious approach to solemn issues.

Siddhi Patel (Maanvi Gagroo), pacing up and down a bridge over the Bosporus, makes a plaintive phone call to Umang Singh (Bani J). Alarmed, the latter talks Damini Rizvi Roy (Sayani Gupta) and Anjana Menon (Kirti Kulhari), the other two members of the divided quartet, into sinking their differences - "a temporary truce", one of them calls it - and flying to Istanbul to bail out the "baby of the gang".

Umang fears Siddhi is "on the edge". False alarm! She is hale and hearty, in bed with a Turkish stud, and basking in what she claims to be "a post-coital glow". Not bad for a girl who had a rough time losing her virginity. But turns out that there's a price to pay for the endorphin rush. The hot-bod's a gigolo. He costs 350 euros a night. All this is packed into the season's first few minutes. Series creator Rangita Pritish Nandy, writer Devika Bhagat, dialogue writer Ishita Moitra and director Nupur Asthana leave nobody in any doubt that Dee, Anj, Mangs and Sids are going to be as defiantly irreverent and free of hang-ups as ever, that they will be chasing the pleasure principle with redoubled gusto.

The ten new episodes of the Amazon Prime show are bolder, brighter, breezier and brassier than the ten that introduced us to the volatile world of the four severely conflicted but absolutely unapologetic So-Bo girls early last year. As is their wont, in S2, the girls talk nineteen to the dozen, bare their claws as often as do their souls and bodies, and soldier on gamely even when life and love threaten to stop them in their tracks.

Back in Mumbai, they go all out to make up for the lost time. They have to reckon with a whole lot: sort out the past, deal with the present, and get a reasonable sense of the future. Nothing comes easy. It is time to put their heads together.

The quartet returns (after a four-month hiatus) to their favourite watering hole in Colaba, Truck Bar, taking its owner Jeh Wadia (Prateik Babbar) by surprise. Once the girls have their shots - actually, with Anjana in atonement mode for a DUI conviction and abstaining from hard spirits, it's "three usual and a lime soda" - they get their mojo back, big time and boundless.

Season 2 of Four Shots More Please! is a right royal, rip-roaring ride through the intricacies of hook-ups, break-ups and heartburns, all experienced by, or seen through the eyes of, the four girls. The previous season had left us asking for more. So here it is. There is more of everything here. FRMP! is none the worse for it.

Damini, Anjana, Umang and Siddhi may occasionally seem too flighty, but they always have their feet on the ground. A contradiction in terms? Yes, all four of them are. They are pulled in different directions, but they seek no sympathy nor are they ever on the brink of keeling over and going under.

Damini, the investigative journalist who was eased out of the news website she created, is scrambling to complete a book about a judge who died in mysterious circumstances a day before he is to pronounce a verdict in a case involving a political bigwig. The tome inevitably spells trouble.

Damini's personal life, too, has its share of hiccups, most of them emanating from her chequered equations with the two men in her life - greying gynaecologist Aamir Warsi (Milind Soman) and the much younger Jeh.

Anjana, a successful corporate lawyer, has to reckon with rampant misogyny in the workplace, a supposedly no-strings-attached affair with a married man (Samir Kochchar) and the struggle to move on from her divorce and play the part of a "responsible" single mother.

Umang asserts her sexual identity - she has gone way beyond the need to come to terms with being bisexual - and becomes a close confidante to fading film star Samara Kapoor (Lisa Ray). The two are inseparable even as the divide between them - one is a celebrity, the other a nobody - tends to create occasional discord between the two.

As she seeks to reconnect with her parents (Simone Singh and Fahad Samar), Siddhi stumbles upon a new calling and a potential buddy in Jeh's bar. A stand-up comic act with North Bombay boy Amit Mishra (Prabal Panjabi) gives her a sense of purpose.

The girls seek closure but perfect endings are elusive. They seem to be on top of things at most times, but life is never smooth. And their plans seem well laid-out, but they never play out along the expected lines. The great thing about these women is that they fight on their own terms and expect no quarters.

Four More Shots Please! S2, shot through with wit and warmth, swings between the fizzy and the fulsome, the tantalising and the tender, with striking poise. The show sets a scorching pace, pausing for breath once in a while to zoom in on both the angular and the granular of the highs and lows of the lives of Damini, Anjana, Umang and Siddhi.

Imperturbability is what defines the FMSP girls. Watching them take on the twists and turns - as unexpected as they are absorbing - is a delight. Happy and sorted in the solidity of the sorority, they embody positivity. More power to them!