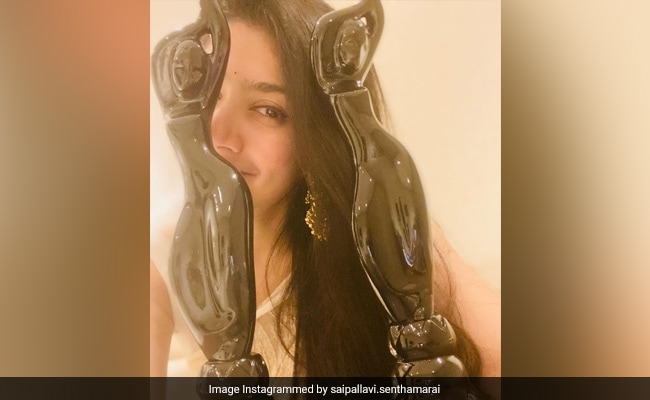 Sai Pallavi, who won two Filmfare Awards South, has dropped a picture with the black ladies (awards) on Instagram and said that "Days like these don't happen that often!. In her note, she added, "To be appreciated for both the films of the same year, This is very special! I'm grateful for the immense love that I had received for these characters and pray that I'm blessed with more such beautiful roles. #SekharGaru @rahulsankrityan #Venkat Garu #SunielNarangGaru & the teams of #Lovestory #ShyamSinghaRoy". In the images, Sai Pallavi can be seen posing with her awards.

Sai Pallavi is one of the most popular actresses in south cinema. She made her acting debut with the 2015 film, Premam, co-starring  Nivin Pauly. The movie was a hit at the box office. Since then, she has featured in several hit films such as Kali, Fidaa, Maari 2, Love Story and many more.

On the personal front, the actress rarely shares pictures with her family. A few weeks ago, she shared a video on her Instagram handle offering a glimpse of her mother, Radha Kannan's, birthday week. Check out the post below:

Earlier, Sai Pallavi shared happy pictures with her family from her vacation album and captioned as "Family trip after ages. This was special."

On the work front, Sai Pallavi will be next seen in Rajkumar Periaswam's untitled with Sivakarthikeyan. The movie is being produced by Kamal Haasan's production house Raj Films.