Emily Blunt Reveals She Was Bullied As A Child For Stuttering 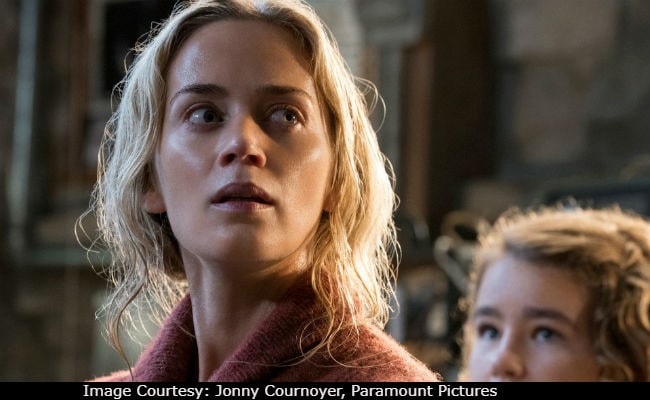 Emily Blunt's new movie The Quiet Place is about a family who tries to live silently, lest terrible things befall them. She won't be speaking much - which is a tad unusual for the British actress. More often, her roles display flawless vocal abilities, via her American accents (The Girl on the Train, Sicario) and singing (Into the Woods, upcoming Mary Poppins).

So it's difficult to believe that Blunt spent her childhood bullied for a nearly debilitating stutter. But that might be what helped launch her acting career.

On the cusp of her teenage years, Blunt was relentlessly mocked by her classmates. As a defense mechanism, she recently told People's Jess Cagle, she essentially hid herself in characters.

"I used to do a lot of funny voices and funny accents because I could speak more fluently if I didn't sound like me," Blunt said.

Her parents enrolled her in various therapies and relaxation classes, but nothing took - until she began acting.

A "fantastic teacher" overheard Blunt's impressions an funny voices, and asked the then 12-year-old to enroll in a school play despite her stutter, a suggestion she greeted with vigorous objections.

"This is kind of remarkable for someone who's not a stutterer, that he had this instinct. It was so special," Blunt recalled.

Blunt, bitten by the acting bug, eventually conquered her stutter, but it will never disappear completely.

"It still comes back and flares if I'm really tired, or when I was pregnant, it was really prominent again," Blunt said.

A stutter might seem to many like a minor affliction, but it can be anything but. For example: Annie Glenn, the wife of astronaut and former senator John Glenn, stuttered so badly that when her 7-year-old daughter stepped on a nail, she couldn't speak well enough to call an ambulance. She had to fetch a neighbor, as blood gushed out of her daughter's foot.

Others have trouble finding work.

"It's a real problem for a lot of people. It's not just kids. You have adults in the 40s and 50s who haven't been able to get the jobs that they deserve, because you're sort of misrepresented by how you speak," Blunt said.

Stuttering is a surprisingly common affliction in Hollywood - a place generally unkind to those living with disabilities - despite a main tenet of acting being flawless line-reading and enunciation. Several big-name actors managed to enjoy a lucrative career regardless. Here are a few.

The Great White Hope actor became one of Hollywood's most famous voices, lending it to The Lion King, Star Wars and CNN. But Jones stuttered so badly that he spent eight years of his childhood barely speaking to anyone - except his family and the animals on the Mississippi farm where he lived.

"Stuttering is painful. In Sunday school, I'd try to read my lessons and the children behind me were falling on the floor with laughter," Jones told the Daily Mail in 2010. "My stuttering was so bad that I gave up trying to speak properly."

But he loved words, specifically the poetry of Edgar Allan Poe. One of his high school English teachers noticed this and had Jones read poetry in front of the class, forcing him to work on his stutter. He eventually learned to keep it enough at bay to make a living with his voice - though it never goes away entirely.

Jones's story inspired so many that in 1987 he became the first recipient of the Annie Glenn Award, which honors those who positively impact people suffering from communication disorders.

From The Seven Year Itch to Some Like it Hot, Monroe's breathy voice was as much a star as she was. But it didn't always roll off her tongue quite so easily. She stuttered from an early age, and a speech therapist suggested that she adopt the throaty tone to overcome her disability. That voice became her trademark, but she never fully stopped stuttering.

"It was terrible," she once said of it. "I don't know how it happened. I just stuttered."

It followed her throughout her career, even inciting the wrath of a director on at least one occasion when she stuttered a line-reading.

Willis is the epitome of cool on-screen, but throughout his childhood, he battled a stutter that lead to such relentless bullying that, as he said, "I had to fight my way out."

His remedy, much like Blunt's, was to become someone else.

"It took me three minutes to complete a sentence," Willis once said. "It was crushing for anyone who wanted to express themselves, who wanted to be heard and couldn't. It was frightening. Yet, when I became another character, in a play, I lost the stutter. It was phenomenal."

He didn't see a speech therapist until an acting teacher in college encouraged him to do so. Now, he's an outspoken advocate for people who stutter.

"My advice to the people in this room is to never let anyone make you feel like an outcast, because you will never be an outcast," Willis said at the 2016 American Institute for Stuttering's annual gala. "I resent the laughter. Think about it, stuttering is the only thing people think they can laugh at. If I was up here talking about having a cleft palate and had it operated on, or had a withered arm or was partially paralyzed, no one would make fun of me at all."

That booming, often expletive-laden voice once cracked, stopped and started with regularity - and it still does from time to time.

"I stuttered really, really, really bad for a long time ... to the point that I stopped speaking for, like, almost a year in school," Jackson told Howard Stern in 2016.

As a young man, it even led to fistfights - "I won," Jackson assured Stern.

He would go to the library to read about stuttering, therapies, breathing activities, anything he could find. While it helped, the panacea to his stutter came in an usual manner - saying a word that is very much associated with Jackson, but that cannot be printed in a family newspaper. Let's just say it begins with the word "mother."